How a young Marlan and Rosemary Bourns College of Engineering alumnus is helping future engineers graduate.

ot long ago, Evan Oculam ’20 had a problem — his computer broke, which made it impossible to take the electrical engineering class he had signed up for.

“I was in a bit of a rough spot,” Oculam recalled.

Luckily, he got some financial help from the Allen Van Tran Engineering Scholarship Fund, which allowed him to complete the course.

“I was saving up for a laptop, so the scholarship really helped me out in a huge way,” he said.

Allen Van Tran ’15 also grappled with financial limitations while studying engineering at UC Riverside. Like more than half of UCR students, Tran was the first in his family to go to college and relied on scholarship support in his academic pursuits. While at UCR, he was awarded the Rosemary S.J. Schraer Endowed Memorial Fund Scholarship, University of California Education Abroad Program scholarships for his studies in South Korea, UCR Honors scholarships, and various undergraduate research grants. In 2015, he graduated cum laude with a bachelor’s degree in chemical engineering. Now, he is the youngest alumnus from the Marlan and Rosemary Bourns College of Engineering, or BCOE, to establish an endowment at UC Riverside. The fund provides money to undergraduate and graduate students pursuing an engineering degree, with preference awarded to first-generation students.

“The time I had to devote to my education was an invaluable driving component to my success in academics,” Tran said. “Many students are bright and willing but have money or time constraints. Having a scholarship supporting them will allow them to flourish.”

Tran, 29, grew up in the Inland Empire after his parents immigrated from Vietnam in the 1970s to escape communism. His first foray into engineering was building Lego sets on Saturday mornings while watching “Pokémon.”

“I loved how the building blocks … could become a completely new outlet of creativity,” he said. 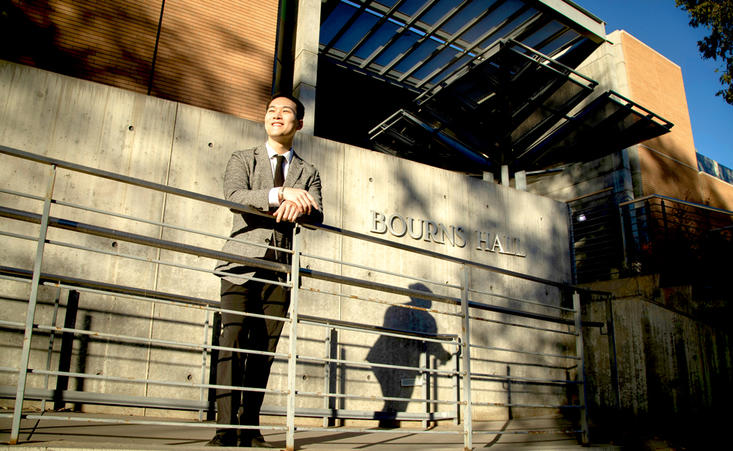 “Learning about other cultures, education systems, and socioeconomic gaps in other parts of the globe further developed my sense of place within the world and how I could contribute as a global citizen,” Tran said.

Now he works as a systems engineer and analyst for the Department of Defense helping the U.S. Navy and Coast Guard improve the reliability, support, and maintenance of equipment. Tran holds to a personal philosophy that values helping others over monetary gains and views education as one of the few great equalizers in our society. Meeting Oculam, the first recipient of the Allen Van Tran Engineering Scholarship, in 2018 further reinforced his belief that education has the power to break barriers, open doors, and bring students into the company of those who have pioneered paths before them. Oculam said Tran also left a big impression on him during their meeting.

“I thought he was a grad student when I first met him; I was surprised he was so young,” Oculam said, still in awe. “It inspired me to want to fund a scholarship in the future. I appreciate all the opportunities I’ve had at UCR and meeting him helped me realize you’re never too young to give back.”

The admiration between the two is clearly mutual.

“While listening to his achievements and future ambitions, I felt inspired by his call to action to help improve the world,” Tran said. “Seeing him graduate in 2020 as his class commencement speaker, I am overwhelmed with joy in his potential.”

During his commencement speech, Oculam made sure to include a shoutout to Tran for helping him along his educational journey. Beyond gratitude for the financial assistance, Oculam credits BCOE’s scholarship program with introducing him to his closest friends, allowing him to work alongside top faculty in his fields of study, and creating a community that shaped a well-rounded student experience. In a thank you letter to Tran, he wrote, “This scholarship is one of the most important ways that you can promote excellence within the college. Financial help that donors like you offer incentivizes people to present their best, support financially at-risk students who have persevered, and recognize individuals who actively make a difference in the programs with which they are involved.”

Oculam, a Redlands native, is now pursuing a master’s degree in bioengineering at UCR and has aspirations to attend medical school. His experience has given him plenty of memories to treasure.

“This was the first scholarship I got that had a donor’s name attached, and it was really cool,” Oculam said. “They took a picture of us, and I got it framed.”