William Grover 3D prints musical instruments in his garage —
but they do more than play notes. 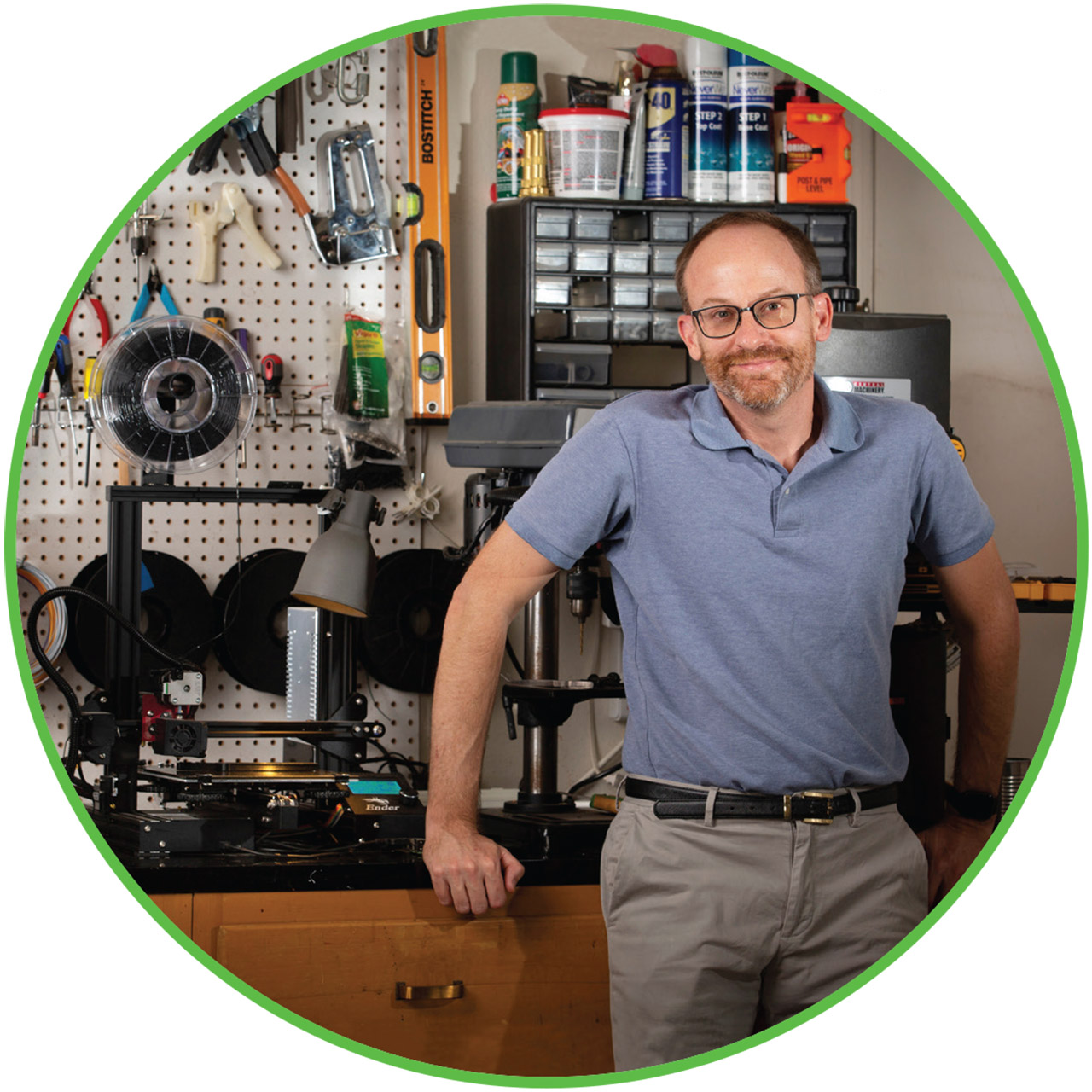 ike many who found themselves at home due to the COVID-19 pandemic, William Grover took to tinkering in his garage to pass the time. What makes his garage unique, however, is that he’s turned it into an at-home laboratory. Grover, an associate professor of bioengineering in UC Riverside’s Marlan and Rosemary Bourns College of Engineering, and a team of graduate and undergraduate researchers develop instruments for use in analyzing substances and diagnosing diseases.

Much of his work requires the use of 3D printers, so Grover set up two in
his garage as a way to continue his work from home until it’s safe to return to campus.

“We can go from an idea to having a device to test — you can do that in a morning now,” he said.

One of his current research projects involves developing sensors to detect if medications have been adulterated, an urgent problem in low- and middle- income countries where up to 10% of medicines are counterfeit, according to the World Health Organization. Grover’s team is creating sensors that are inexpensive and easy to mass produce. What makes them especially novel is the inspiration behind their design — an African instrument dating back thousands of years, known as an mbira, which consists of metal tines of varying lengths attached to a wooden board.

“The ‘aha’ moment was realizing if we put a liquid medicine inside of the metal tine, then that liquid’s density is contributing to the mass of the little vibrating tine, changing the pitch of the musical note it makes,” he said.

The idea came partially from Grover’s own background playing piano. During summers, he works with middle- and high-school teachers to integrate engineering into their curriculum and often uses musical instruments to illustrate concepts.

“Musical instruments are such a great jumping off point to a lot of physics problems because you can see how they work and understand the different physics going on in them,” he said.

A Tennessee native, Grover’s mother worked as a teacher and his father is a retired registered nurse. Grover volunteered every summer at the Veterans Affairs Hospital where his father worked, and watching the doctors and nurses treat patients sparked his interest in health. He earned a bachelor’s degree in chemistry from the University of Tennessee followed by a doctorate in chemistry from UC Berkeley, having attended science programs at both campuses as a high school student. He completed postdoctoral training at the Massachusetts Institute of Technology before joining UCR’s faculty in 2012.

“I didn’t want to be a professor so much as I never wanted to leave the university environment, because it’s the perfect mix of everything,” Grover said.

Grover has extended his interest in exposing fraud beyond fake medicine and has taken up the unique hobby of exposing fake universities in his spare time.

“My secret, after-hours identity is I like researching academic fraud and misconduct,” he said.

Recently, he blew the whistle on a supposed Orange County-based university preying on academics by promising to publish their work in a nonexistent journal. He discovered the scam after realizing the institution’s history was stolen from the University of Alberta in Canada, which his wife had attended.

“I love having the opportunity to expose these charlatans and give people tools to defend themselves from that kind of fraud,” he said. “It’s the same motivation in my research.”

Versions of mbiras, also called kalimbas, have existed in Africa as far back as 3,000 years ago, and were the inspiration for Grover’s research into using musical instruments as sensors for counterfeit medication. Using scrap wood and metal tubing from his garage, he built a density sensor based on the mbira from scratch, offering an easy, inexpensive alternative to current costly devices. “The hard part was being aware that the instrument existed, because it’s not very common,” he said. His lab is looking into converting other musical instruments into sensors that can be 3D printed and mass produced at low cost. 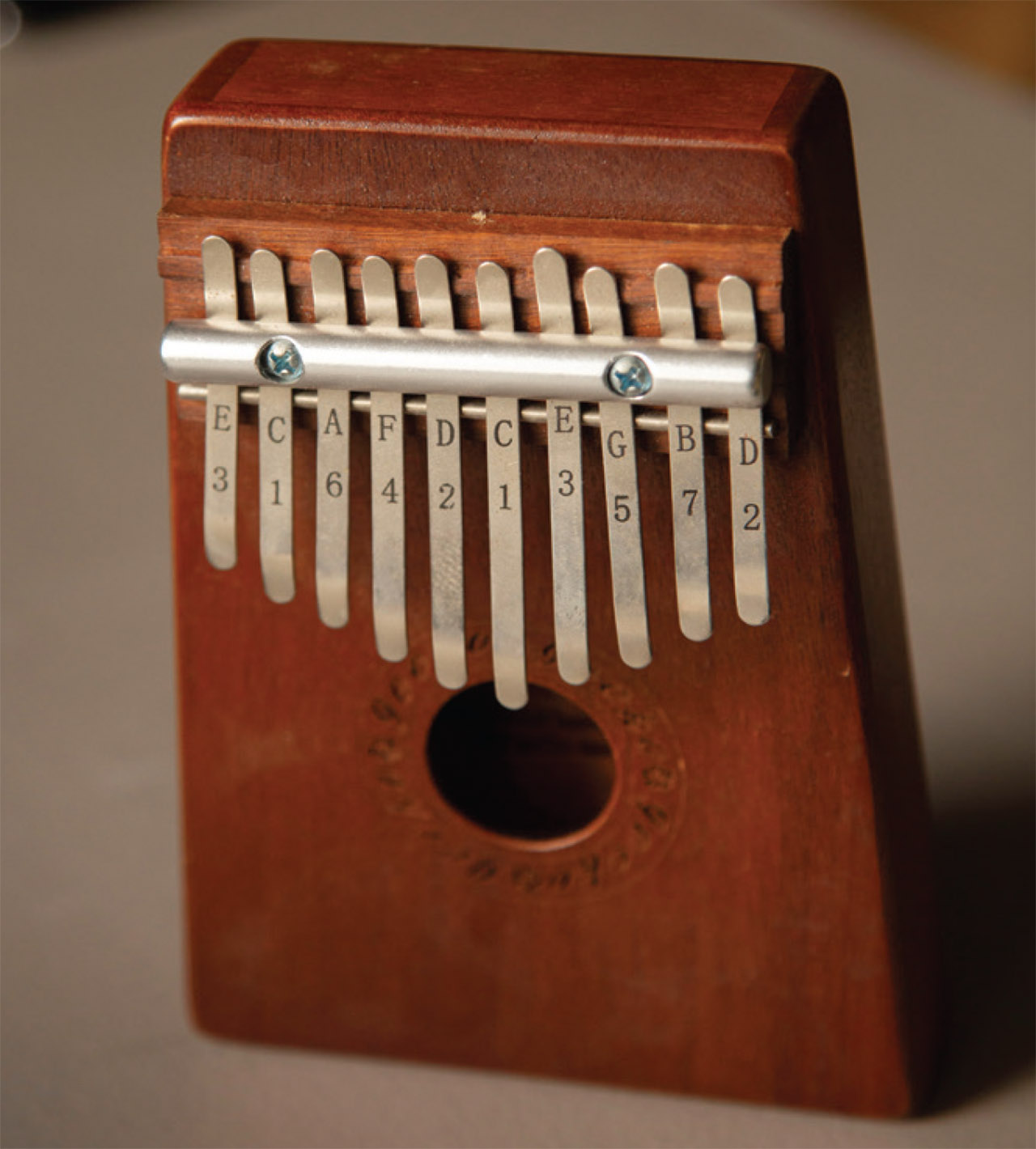 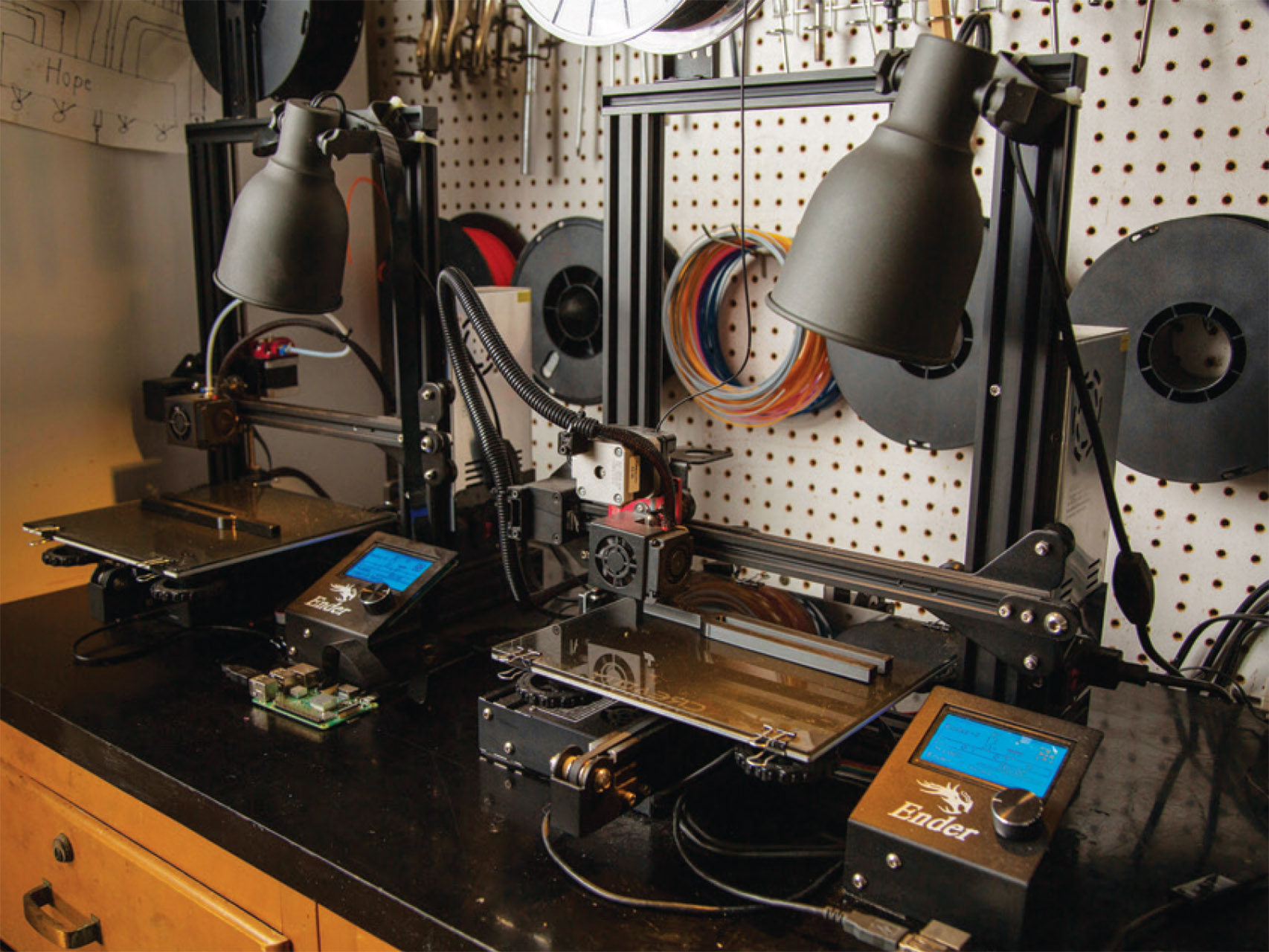 Grover set up these two 3D printers in his garage after UCR transitioned to remote instruction last year. In addition to continuing his research, Grover also used the printers to manufacture roughly 300 face shields for Riverside County’s public health department early in the pandemic. “I reached out to them and said, ‘I’ve got two 3D printers, and I’m just sitting at home, what can we do?’” he said. The printers sit on benches that came from UCR’s original chemistry building, which Grover acquired from the previous owner of his Riverside home, a former professor of plant pathology. Grover said the professor took the benches when they were being thrown out from a lab under renovation. “All these years later, they’re still being used for research,” Grover said.

In this photo, an 18 year-old Grover has his periodic table T-shirt corrected by Glenn Seaborg, a UC Berkeley chemist whose involvement in the discovery and synthesis of 10 elements earned him a Nobel Prize in 1951. Seaborg was also the first living person to have an element named after him. “The shirt I was wearing had the old name for the element, ‘unnilhexium,’ so he corrected it to Seaborgium using a pen,” Grover said. “This is about as close to superstardom as you get as a chemist.” This interaction during a high school summer program at the campus is what inspired Grover to later attend UC Berkeley for graduate school. 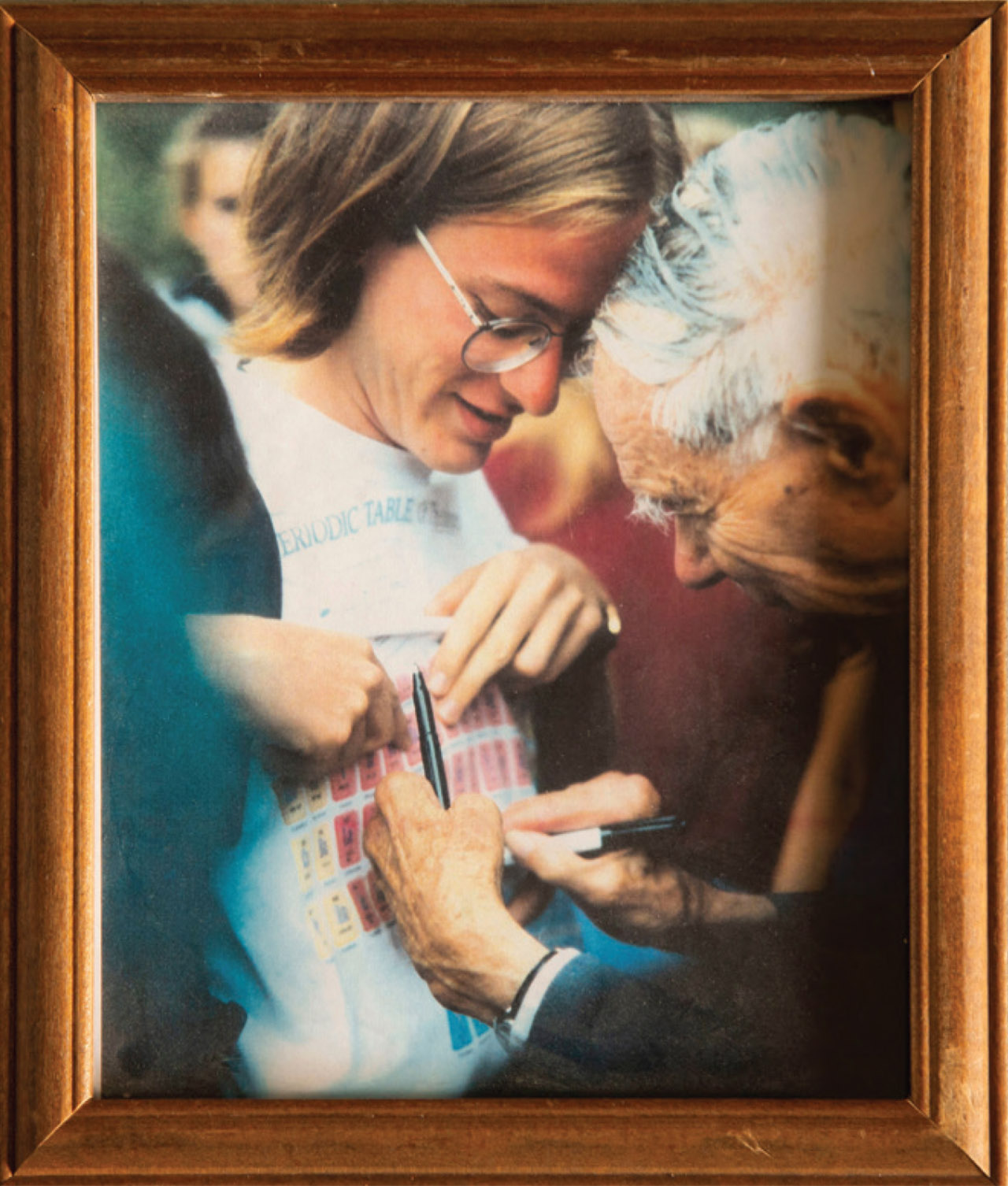 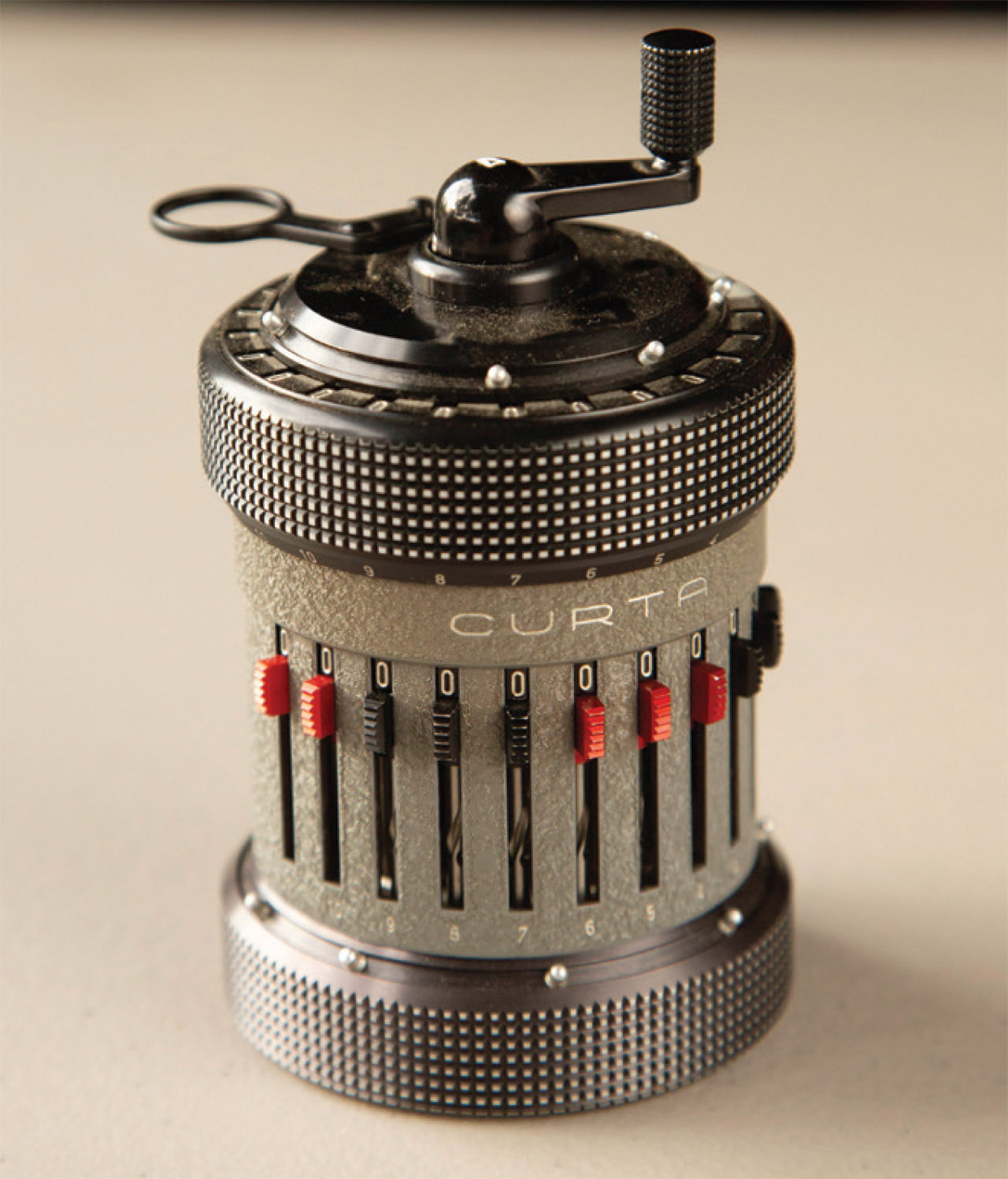 Grover has a collection of mechanical calculators that have inspired much of his research into nonelectric computers for biomedical applications, another large area of interest for him. The Curta calculator’s design dates back to World War II. The device can add, subtract, multiply, divide, as well as calculate square and cube roots. “It’s arguably one of the most complex mechanical mechanisms ever built and was designed by Curt Herzstark while he was imprisoned by the Nazis in the Buchenwald concentration camp, in a desperate effort to save his life,” Grover said.