‘JEWEL IN THE CROWN’

The Givaudan Citrus Variety Collection sits at the forefront of global agricultural innovation. 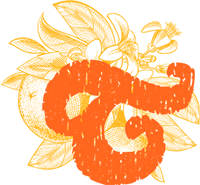 he collective histories of UC Riverside and the Southern California citrus industry are as interwoven as the strands of a vine. At the vine’s heart lies what’s now known as the Givaudan Citrus Variety Collection, which has helped researchers fight pests and diseases, improve horticultural practices, and introduce new varieties to make California one of the world’s top citrus producers for over a hundred years. In 1907, some three decades after the first orchards were planted, citrus growers had become concerned about the future of the region’s citrus in the face of environmental challenges. Competition from Northern California, Florida, and Puerto Rico had also multiplied the threats to this prosperous industry. With state funding, the University of California built a Citrus Experiment Station on the east slope of Mt. Rubidoux, not far from downtown Riverside, to overcome these obstacles through science. 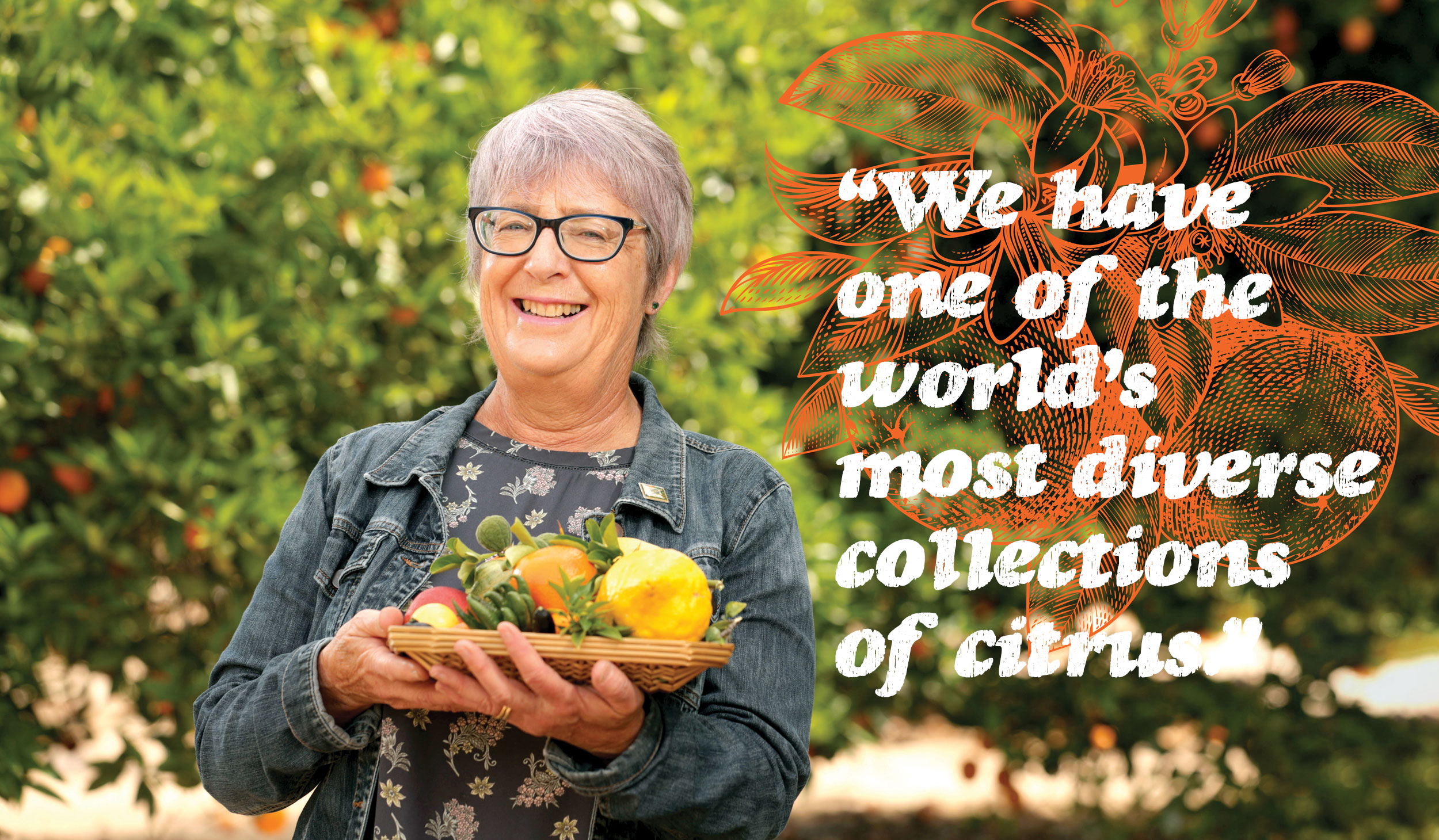 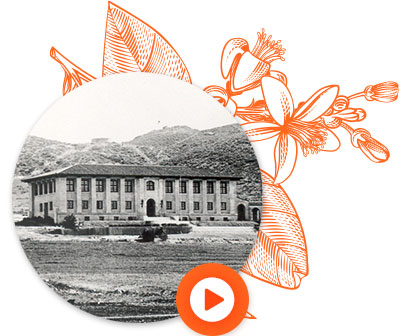 CLICK HERE TO WATCH From the vault: an educational short about the Citrus Experiment Station at UC Riverside.

Ten years later, staff from the Citrus Experiment Station planted citrus trees on 5 acres adjacent to the lab’s new home in a Mission Revival building perched near the foot of the Box Springs Mountains. The collection was meant to conserve and evaluate citrus and citrus relatives and to bank citrus genetic diversity for research. Today, it contains at least two trees each of approximately 1,000 species and cultivars — the latter being plants developed through deliberate selection — including most of the world’s commercially important and historic citrus varieties, totaling more than 4,000 plants on about 25 acres.

“We have one of the world’s most diverse collections of citrus and related genera,” said Tracy Kahn, Ph.D. ’87, Givaudan Citrus Variety Collection Endowed Chair and curator.

This diversity has spawned a plethora of research and preservation initiatives housed in or that take advantage of collection resources. These include the U.S. Department of Agriculture’s National Clonal Germplasm Repository for Citrus and Dates. The repository collects and preserves trees, seeds, and tissues of citrus and related genera with the widest possible genetic variation for horticulture and study of pathogens. It makes pathogen-free specimens available to researchers around the world and ensures citrus crops have enough genetic diversity to recover from disaster. The group, together with UCR Agricultural Operations, also partners with the staff of the Givaudan Citrus Variety Collection to help preserve and maintain this amazing citrus diversity for research. In the same way, the Citrus Clonal Protection Program makes specimens that have been tested and are found free of specific pathogens available to the citrus industry.

“This is important not just because we’re preserving it, but because people use it,” Kahn said.

Through the Integrated Citrus Breeding and Evaluation for California program, Kahn and UCR’s Mikeal Roose, Peggy Mauk, and Danielle Seymour work with citrus growers to develop, identify, and evaluate new cultivars and test planting strategies to increase early production and maintain disease-free plants. With their knowledge of the citrus market, growers define desirable qualities in taste, texture, transportability, and profitability.

“It’s one thing to make fruit that’s really beautiful and wonderful, and it’s another to see if it fits in,” said Kahn, who works primarily on evaluation.

Anyone who has eaten a seedless, easily peeled mandarin sold as Cuties or Halos has probably enjoyed the literal fruits of this endeavor. Tango mandarins, one of the varieties sold under those trademarks, were developed by Roose, a professor of genetics; and Tim Williams, a citrus researcher; at UC Riverside. 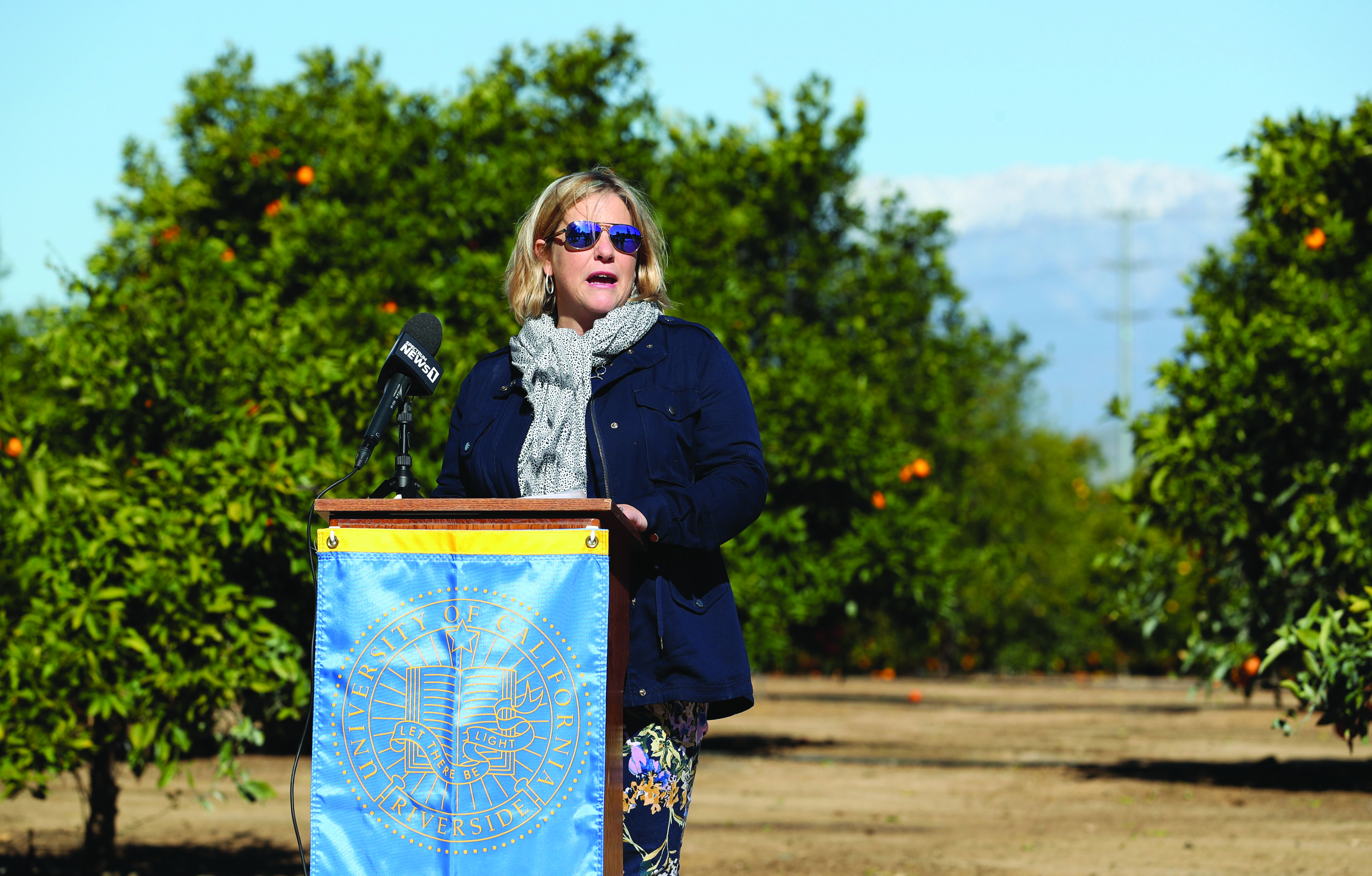 Kahn’s enthusiasm makes her a natural ambassador for the collection. She started the first fund to support the collection by placing a donation basket on a table of citrus at Riverside’s Orange Blossom Festival. The donation basket became a tradition and with Kahn’s help grew into the Citrus Variety Collection Endowed Fund.

“It’s something I have passion for,” Kahn said. “It’s an amazing job. I get to tell people about, share, work with students and growers, and eat citrus. I’ve been to the Culinary Institute of America and cooked with their chefs.”

Kahn, who received her doctorate from UCR in botany and plant sciences, took two courses in the last year of her studies called Citrus and Relatives and Citrus Culture from W. P. “Bill” Bitters, curator of the Citrus Variety Collection from 1947 to 1982.

“Citrus and Relatives had a 10-week lab where Bill would lay out citrus and feed us wonderful-tasting things,” Kahn said. “He had a knife and was cutting fruit, and as you walked in he’d hand you a slice.”

The students had become accustomed to sensational flavors when, one day, Bitters surprised them with a piece that looked like a lovely sweet orange but tasted acrid and bitter. What went wrong, the students wondered? The fruit came from a rootstock variety, Bitters explained. Kahn and her class learned that all citrus fruit is produced by grafting branch segments, called scions, onto rootstock of a variety that resists drought, pests, cold weather, or harsh soil conditions. Hardy rootstock citrus varieties tend to produce fruit that doesn’t taste very good. By swapping out their fruit-producing parts for those of a tasty variety, such as a navel orange, citrus growers can raise vigorous trees that yield delectable fruit. Kahn tells students that citrus trees are really a sandwich of two trees: One on the bottom, which helps resists disease and provide other benefits, and one on the top, which produces delicious fruit. Those lucky enough to tour the Givaudan Citrus Variety Collection with Kahn will find she continues Bitters’ tasting tradition as she carries a sharp knife, cutting samples from around the orchard to offer guests. She oversees a collection that helps researchers continue one of his more important efforts — saving California’s citrus from a deadly epidemic.

In 1946, an insect-borne disease called tristeza spread throughout California. Bitters screened over 500 cultivars to determine which rootstock-scion combinations both resisted tristeza and possessed suitable horticultural characteristics, eventually finding several that were released to the citrus industry. An uncertain future once again hovers over California’s iconic citrus groves on the wings of a tiny insect. The Asian citrus psyllid carries a bacterium, Candidatus Liberibacter asiaticus, which enters plants when the insect feeds on them. The bacterium causes a disease called Huanglongbing, or HLB, which makes the tree produce small, misshapen, unripe fruit with no commercial value, and eventually kills the tree. The insect arrived in San Diego and Imperial counties in 2008 after obliterating citrus crops in China, Brazil, and Florida. It moved steadily north, appearing in Riverside County in 2010, and by 2019 had been observed in almost every county between San Diego and Sacramento. HLB-infected backyard trees have been found throughout Southern California, including Riverside, not far from the collection. Biocontainment measures have so far prevented the disease from spreading to commercial orchards in Ventura County and the Central Valley. But if these measures fail, HLB could gut California’s $3.3 billion citrus industry, which supplies 80% of the nation’s fresh citrus and exports to over 16 countries. 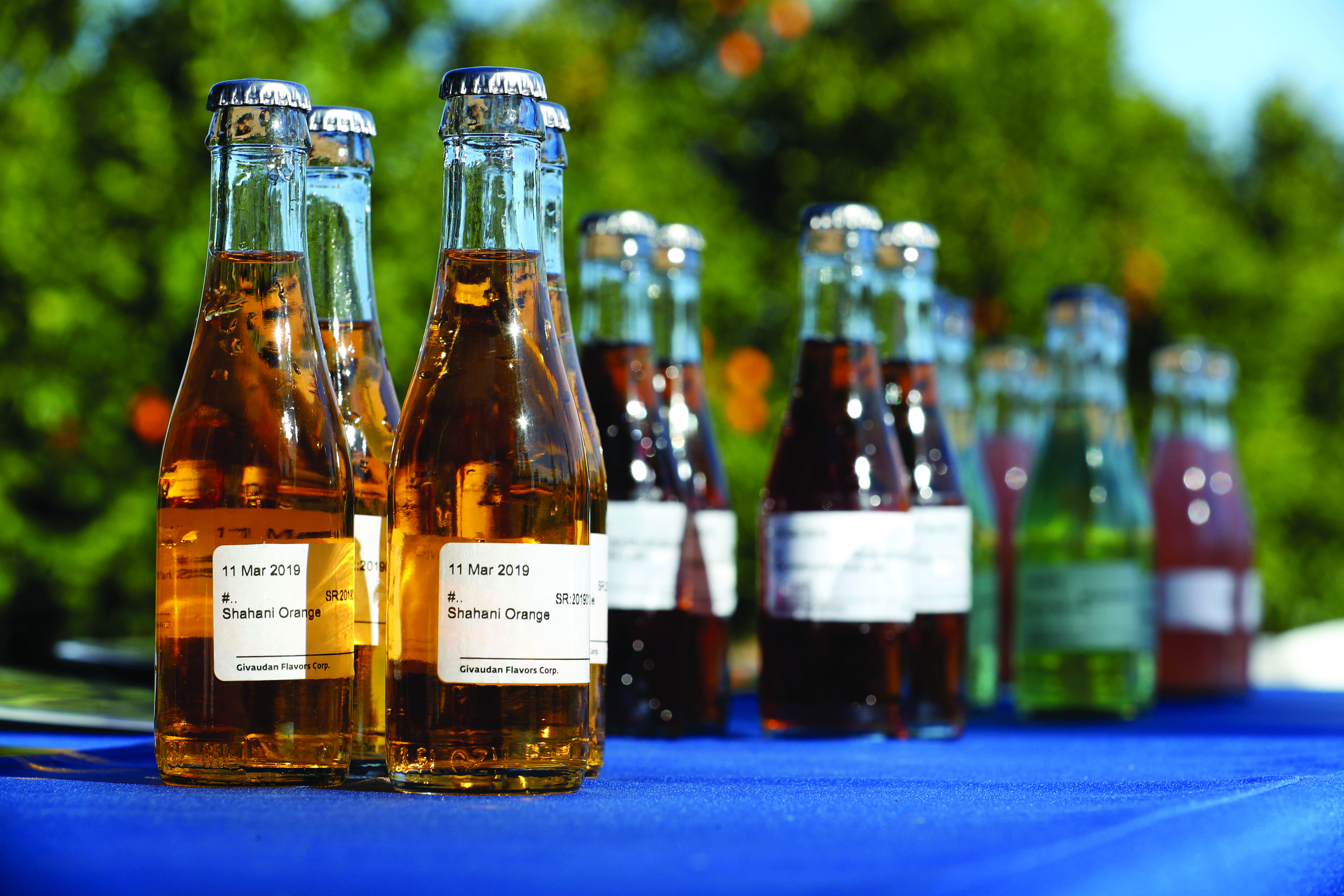 A selection of drinks crafted by Givaudan featuring UCR-grown fruit.

Givaudan, which is based in Switzerland and recognized as the world’s leading flavor and fragrance company, has partnered with UCR’s citrus collection since 2006, when the company initiated a program called TasteTrek Citrus in which Givaudan representatives bring clients to the collection for a taste and scent tour with Kahn. The company has developed hundreds of flavors inspired by the fruits of the collection, said Dawn Streich, Givaudan’s global product manager for citrus.

“Some of my favorites are a pink lemonade flavor inspired by the variegated pink Eureka lemon, which tastes like lemonade in a frilly-pink dress, and an Abhayapuri lime-inspired flavor, which offers peely, spicy notes with hints of grapefruit, pepper, and tangerine,” Streich said.

In 2015, Givaudan donated $1 million to create the Givaudan Citrus Variety Collection Endowed Chair, currently occupied by Kahn, to support and maintain the collection in perpetuity.

“My love of citrus has everything to do with the freshness, diversity, and sparkle that fresh citrus fruits and flavorings provide,” Streich said. “My deep appreciation for agriculture and learning about where our food comes from makes my relationship with Tracy, UCR, and the citrus collection not just a professional endeavor, but a deeply personal connection between what Givaudan does and the love for nature that inspires our work.”

In 2019, Givaudan took its commitment to citrus biodiversity to the next level by donating $3.5 million to UC Riverside for the construction of screened structures to further protect the collection from HLB, creating an even deeper working relationship between Kahn and Streich. The structures are houses built of fine screening on a metal frame surrounding the citrus trees. The Asian citrus psyllid can’t get through the screen’s mesh, and special features at the entrance keep them out when caretakers come and go. The gift provides funding for a 2.8 acre, 18-foot-high screenhouse and $2 million to maintain and care for the plants inside the structure, which will house specimens of all the major varieties in the collection, along with other types being evaluated by staff. When finished, it will be visible from Iowa Avenue.

Beyond shielding citrus trees from the Asian citrus psyllid, UCR researchers are using the collection to find ways to prevent, cure, and resist HLB. Some, such as plant scientist Chandrika Ramadugu, are trying to breed HLB-tolerant citrus by identifying and introducing genes from citrus and related plants that have some natural resistance to the disease. Others, including plant pathologist Caroline Roper, are studying changes to the root microbiome in infected trees. When weakened, this community of bacteria, viruses, fungi, and protozoa living in and around the tree’s roots might allow secondary parasites or pathogens to attack, hastening its death. Roper leads a team from UCR and several other institutions that has received $10 million from the National Institute for Food and Agriculture to study root microbiomes in California and Florida, where HLB-infected trees are ubiquitous.

Perhaps the most promising advance to date was discovered last year in the collection’s Australian finger limes, an oddly named citrus relative that does not bear much resemblance to limes. Plant geneticist Hailing Jin identified a peptide in Australian finger limes that makes them naturally resistant to the bacterium that causes HLB. In greenhouse experiments, when applied by injection or spray to infected trees, the peptide led to a decrease in bacteria levels. Though it hasn’t yet been tested in the field, and a product won’t be on the market for a long time, UC Riverside has licensed the technology to Invaio Sciences for commercial development. Whenever the cure for HLB is finally found, there’s a good chance UC Riverside scientists and their industry colleagues will have participated in its discovery. With ongoing partnerships like Givaudan’s, UCR’s efforts to help preserve the California citrus industry could go on for another century — and beyond.

“We are happy to contribute to supporting and maintaining this amazing biodiversity treasure,” Streich said. “The research conducted at the collection is nearly as varied as the number of fruits, ranging from the development of new varieties to understanding how to prevent disease. Our partnership is without question a jewel in the crown of our citrus research.”

A Toast to UCR 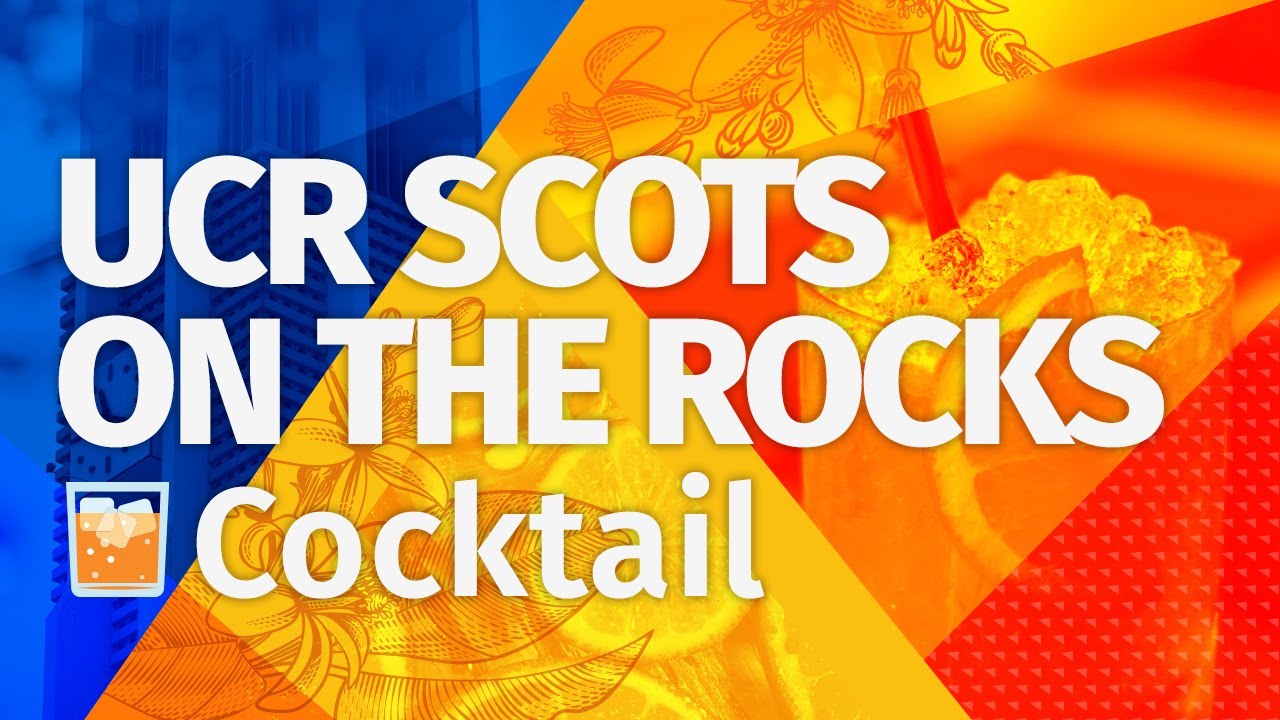 SCOTS ON THE ROCKS

Combine 3/4 cup each of honey and water, add 6 sprigs of thyme, simmer for 10 minutes, steep mixture 15 minutes then strain, add 3/4 cup of fresh squeezed blood orange juice. Refrigerate until use.

Steep 1 bag in 8 ounces of hot water for 5 minutes. Cool tea in refrigerator before use. 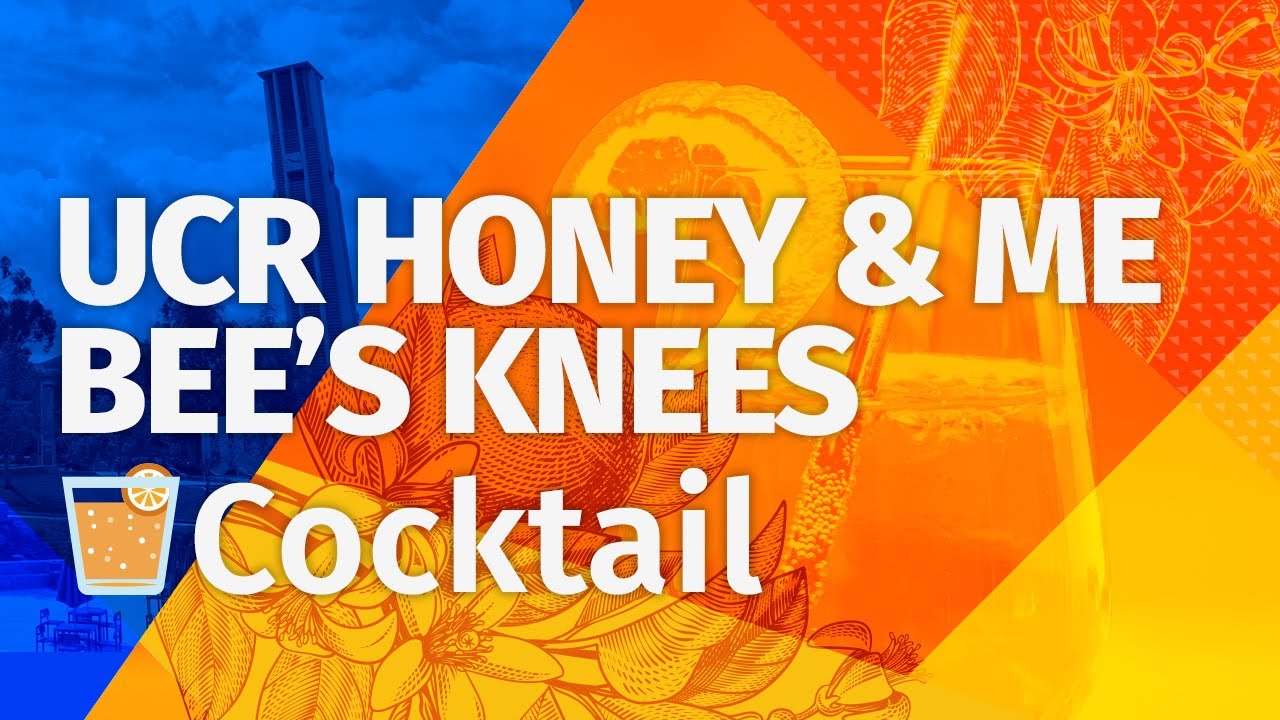 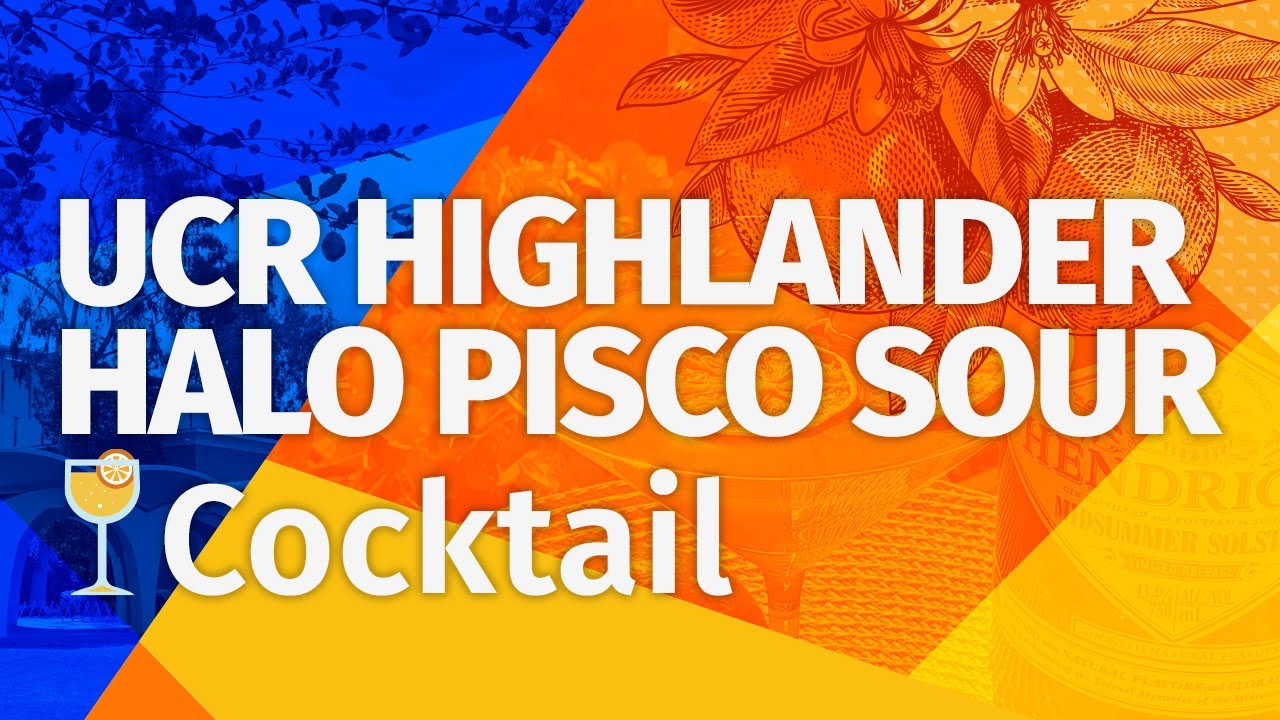 Combine all ingredients in a saucepan, boil then simmer, reduce by half, strain, and store until use.