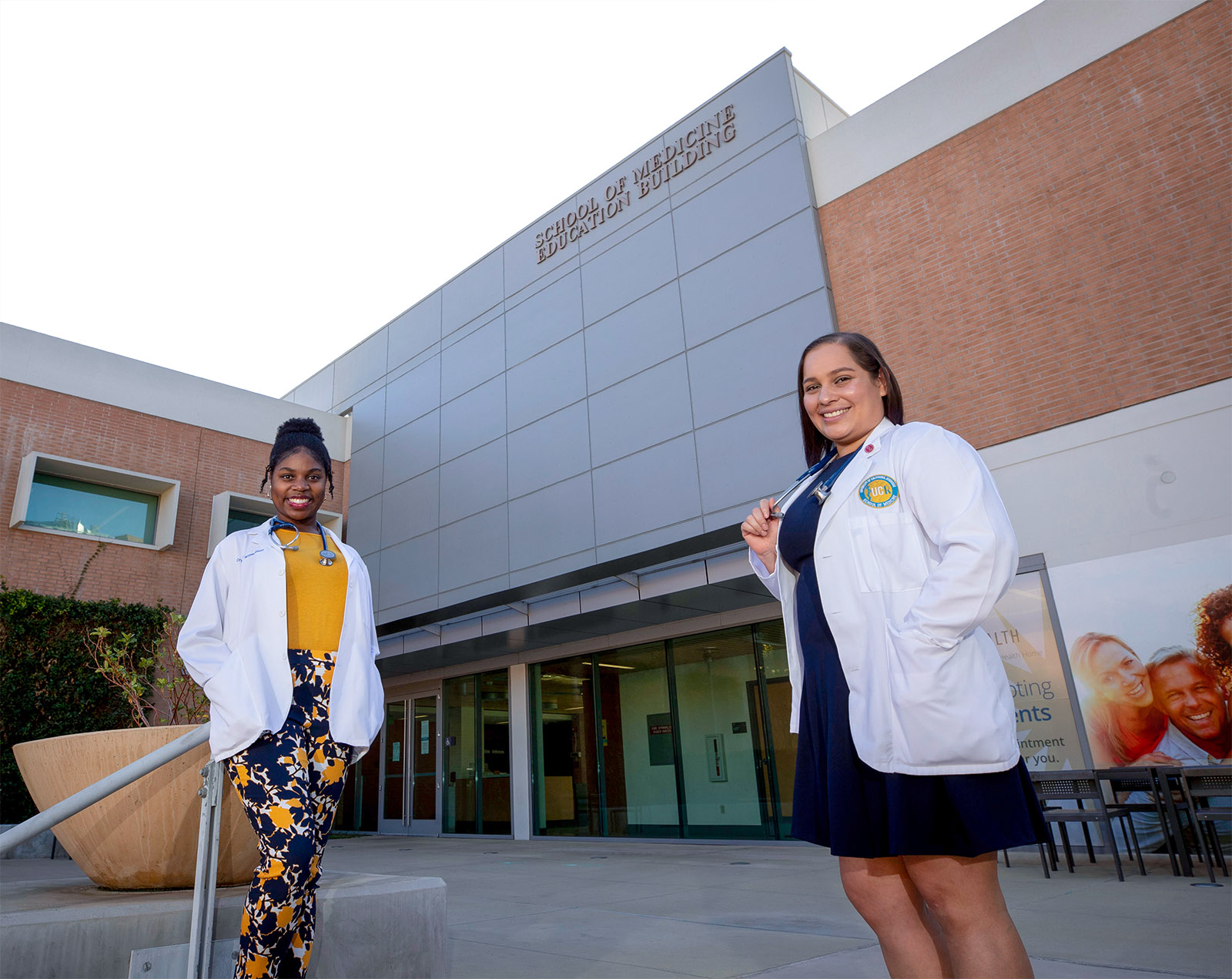 The medical school’s scholarships and pipeline programs give students a chance to serve their communities.

Alma Esparza Castañeda will never forget her first day of anatomy class at UC Riverside. With a human cadaver lying on a table in front of her, she said a short prayer and began dissecting the body, removing the heart, and holding it in her hand to observe it. She thought about how her many years of interest in the cardiovascular system had culminated in a heart linking two bodies — one living and one dead. Gently massaging the heart to reveal the arteries, she felt profoundly connected to the body that had housed the fist-sized organ capable of sustaining life by beating 100,000 times a day.

“It was lifeless, yet it symbolized life,” Esparza Castañeda, 29, said. “The students in class would refer to the hearts they had excavated as their hearts. ‘How’s your heart? Mine turned out good.’”

Now in her second year in the UCR School of Medicine, Esparza Castañeda has leaned toward pediatrics. The recipient of a two-year Mission Award Scholarship funded through private donors, corporations, and the School of Medicine, she loves children and wants to practice in California’s Coachella Valley, where she grew up with her mother and six siblings. A first-generation student, she expects to graduate with her M.D. in 2023. Esparza Castañeda has availed of the medical school’s popular pipeline programs, which were launched more than 20 years ago and are funded by the school and external grants. Aimed at facilitating students’ entry into health professions, the School of Medicine has 10 programs; the most popular — and demanding — being the yearlong Premedical Postbaccalaureate Program, through which students who have received their bachelor’s degree can receive additional academic experience to boost their chances of being accepted to medical school. Esparza Castañeda has taken advantage of this program as well as the Health Coach Program that placed her as a volunteer at a Palm Springs family care clinic.

“For two years, I got to work with nurses, physicians, and medical assistants at the clinic,” she said. “I even had my own patients to guide and educate about nutrition, hypertension, diabetes, and cholesterol.”

Like many UCR medical students, Esparza Castañeda is grateful to have met Dr. Emma Simmons, senior associate dean of student affairs, during her postbaccalaureate year; and Sunny Nakae, an associate adjunct professor, who welcomed and encouraged her from the start.

“I felt I could approach them at any time,” Esparza Castañeda said. “My advice to students considering a medical profession is to take full advantage of the pipeline programs and the generosity of people like Drs. Simmons and Nakae. The rich experience I got by participating in the postbaccalaureate program was crucial when I applied to medical schools. As a way to give back, I volunteered in the Future Physician Leaders program last summer and mentored two students.”

“Our students are often the first in their families to attend college and need support navigating college experience as premedical students,” said Teresa Cofield, director of the medical school’s pipeline programs. “Our programs develop their leadership skills and understanding of the health care needs in the local community. They provide a forum for students to showcase their strengths and receive resources and mentorship to realize their future in medicine.”

Volunteering has fundamentally shaped Esparza Castañeda’s professional journey, which began in her senior year at Palm Springs High School when she served in the Desert Regional Medical Center’s radiology department.

“I got to shadow technicians, see the procedures, talk to patients,” she said. “As a child, I would often play doctor. But this was the real deal. Immediately, it felt right for me to be there. I had found a second home.”

In 2010, Esparza Castañeda enrolled at UC San Diego with the goal of pursuing medicine. However, her undergraduate years were difficult, and she struggled academically. Esparza Castañeda received her bachelor’s degree in human biology, but she knew she needed to improve her approach to learning if she wanted to realize her dream of becoming a doctor.

“I did not know how to study correctly,” she said. “My grades suffered because I also had to work to support myself. I never asked questions in class. I never asked for help. It soon dawned on me I would need a more competitive GPA to get into medical school. That’s when I set my shyness aside and applied to the postbaccalaureate program at UCR. It appealed to me that the medical school was geographically close to my family. Its mission to serve the underserved population in inland Southern California resonated deeply with me.”

Crystal Witherspoon, a second-year student preparing to graduate in 2023, said she was inspired by how the school was training a diverse group of physicians to better serve the region. A second-generation student, Witherspoon, 27, grew up in a Navy family. Born in Spain, she graduated high school in Japan in 2010, soon after which her family relocated to San Diego. That year, she began undergraduate studies at UCLA.

“I watched my mom and dad complete their bachelor’s degrees while working full time and raising me,” she said. “I was inspired by their dedication and perseverance. They showed me the value of education.”

While Witherspoon pursues medicine, her husband Michael is going to dental school. Years of observing health disparities in communities of color persuaded Witherspoon to become a doctor. She saw how people of color disproportionately suffered from illnesses that could be prevented with proper coverage, access to care, and an understanding of holistic health and the health care system. In 2018, the UCR School of Medicine invited her to apply to its Conditional Admission Program.

“I was ecstatic,” she said. “I received the invitation shortly after I got my master’s degree at the Loma Linda University School of Public Health, as I was applying to medical school for the second time,” she said. “I like to think I was selected because UCR saw potential in me as a medical student.”

Like the Premedical Postbaccalaureate Program, the Conditional Admission Program takes a year to complete. Witherspoon enrolled in upper-division science classes as part of the curriculum. As long as she completed them with the required GPA, she was assured a seat in the following medical school class. Serving as a helpful steppingstone to medical school, the program helped build her confidence as she tackled courses and succeeded, Witherspoon said.

Medical students prepare for a dissection course in the Gross Anatomy Lab.

Like the Premedical Postbaccalaureate Program, the Conditional Admission Program takes a year to complete. Witherspoon enrolled in upper-division science classes as part of the curriculum. As long as she completed them with the required GPA, she was assured a seat in the following medical school class. Serving as a helpful steppingstone to medical school, the program helped build her confidence as she tackled courses and succeeded, Witherspoon said.

“When I first started college in 2010, taking pre-med classes as a science major was new territory for me,” she said. “I found the transition into such a rigorous degree program to be quite difficult, and it took me some time to develop the skills I needed to succeed as a pre-med student. By the time I entered the Conditional Admission Program at UCR, I was able to apply everything I learned as a pre-med and graduate student to my new course of studies, and it helped me grow.”

In the program, Witherspoon took classes that were critical to her success as a first-year medical student, and which she wouldn’t have been able to fit into a typical degree plan. These included microbiology, immunology, cancer biology, and embryology, among others.

“Entering this pipeline program was like entering into a family,” Witherspoon said. “From the very first day, I got support from both the medical school and pipeline program, with personalized communication and guidance every step of the way,” she added, noting Cofield, pipeline programs director, played a critical role in her success and helped ensure her transition into medical school was seamless.

Witherspoon said she is also grateful to Simmons, the senior associate dean of student affairs, who inspired and supported her frequently with advice and encouragement.

“The medical school provides us with so many opportunities to learn, grow, and serve,” Witherspoon said. “As students, if we see needs within our school or community, the school supports us in addressing those needs through free clinics and interest groups.”

In her mind, the pipeline programs offer the perfect place for students to solidify academic skills, prepare for the medical school curriculum, participate in research, connect with faculty and advisors in the medical school, become familiar with the campus environment, and get involved in student-led activities.

“I am still in communication with my colleagues from the program,” she said. “Four of us completed successfully, and now we’re in medical school together.”

Witherspoon is actively involved in a free clinic in Riverside where her interactions with patients often consist of taking a full history, conducting a physical exam, and consulting with the supervising doctor to come up with an appropriate care and treatment plan.

The recipient of a four-year Inland Empire Health Plan Mission Award Scholarship, Witherspoon plans to become an OB-GYN and is excited to work at the intersection of public health and medicine, with an emphasis on women’s health, healthy pregnancies, and healthy babies.

“The School of Medicine is making it possible for students like me to serve in the Inland Empire and address needs that are particular to this region. This community-based medical school, it has to be said, has heart.”

In the 2019-20 academic year, nearly 1,900 students participated in the medical school’s pipeline programs. The yearlong Premedical Postbaccalaureate Program allows students who have received their bachelor’s degree to receive additional academic experience to boost their chances of being accepted to medical school. The FastStart, Future Physician Leaders, and Health Coach programs provide pathways for undergraduate or high school students interested in a medical or health career. The Bridges to Baccalaureate Program helps facilitate the transfer of Riverside City College students into science, technology, engineering, and mathematics majors. The Health Sciences Partnership is a collaboration between UCR and local high schools. The Medical Leaders of Tomorrow is a weeklong residential summer program directed at ninth-grade students in inland Southern California. The Medical Scholars Program prepares UCR undergraduate students for health and biomedical research careers. There’s even a Mini Medical School that serves residents of Inland Southern California by addressing health disparities. 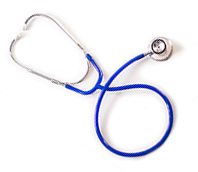