Grace Cheng Braun ’81 has spent much of her career representing a vulnerable population that can be too easily forgotten.

As CEO and president of Santa Monica-based WISE & Healthy Aging since 2005, she leads one of the most well-known nonprofits in the Los Angeles area providing social services for the elderly. The organization offers many programs, but its Adult Day Service Center might be the most impactful.

The center allows families and caregivers to drop off elderly family members at 8 a.m. and pick them up at 6 p.m., during which time they receive social interaction and other vital services.

The elderly often suffer silently, she said, especially those from a particular generation.

“Many grew up in the Depression and dealt with so much and didn’t complain,” Cheng Braun explained. “That doesn’t mean they should stay quiet now, but they often do. That’s why we need to stand up for them.”

The nonprofit also understands caregivers need direction in how to best fill this role. Its Caregiver Academy trains these individuals to deal with different challenging situations, such as Alzheimer’s disease or dementia, and the course is offered in several languages, including Spanish, Korean, and Farsi.

“We train both what we call family lay caregivers and also those who are paid working caregivers,” said Cheng Braun, who previously served as vice president of marketing and public relations for L.A.’s Cedars-Sinai Medical Center from 1997 to 2004. “Our caregiver training has the distinction of being evidence based and nationally recognized,” she said.

Though WISE & Healthy Aging offers other services focusing on mental health, including support groups and peer counseling, the nonprofit had to end its mental health therapy program in 2019 due to a change in Medicare reimbursement, Cheng Braun said, noting the group is looking for alternatives.

“Our philosophy is if we can’t provide it, we want to know who in the community are the models that do provide those services,” she said.

Cheng Braun’s strong leadership skills were cultivated in part at UC Riverside, where she received a bachelor’s degree in psychology. She later earned a master’s in public health at UCLA. At UCR, Cheng Braun learned from role models such as Ruth Comly, who worked in university relations; and Sally Dow, who worked in alumni outreach. She got to know Comly through a summer job in the university relations office and met Dow after being selected as one of six California high school seniors to receive a freshman alumni scholarship. “They showed with their professionalism and kindness how to be a powerful woman in your own right,” Cheng Braun said.

“They went on to become my friends after graduation.” Cheng Braun participated in many campus activities during her student years and may have even convinced some future Highlanders to attend.

“I have a soft spot for UC Riverside,” she said. “I actually had the opportunity to participate on the UC Riverside Alumni Board as a student representative and became involved with the university in the Highland Clan, where students provide tours of the campus.”

She credits her student activities with helping her grow as a leader, noting she developed conflict resolution skills as a resident advisor and improved her presentation and public speaking abilities through her work with the Highland Clan.

Looking back on her time at the nonprofit, Cheng Braun said she has always admired the elderly’s fortitude to be independent but wants her organization to always be there so they know they don’t have to go it alone.

“We are out to contribute quality to their life,” Cheng Braun said. “These were the people who worked hard and have contributed to our communities. They deserve to be taken care of.” 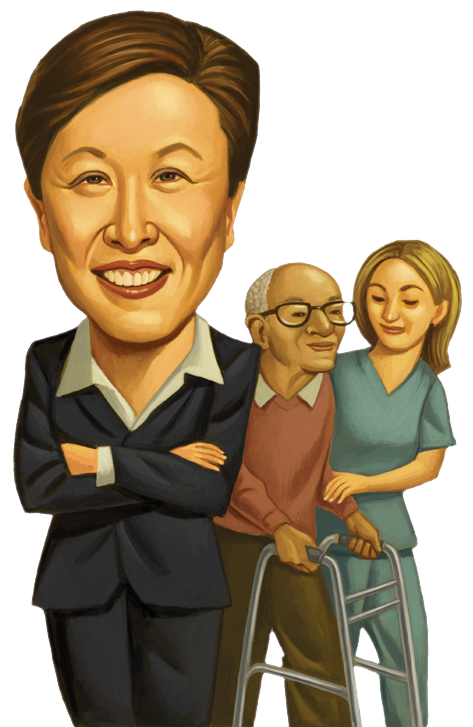