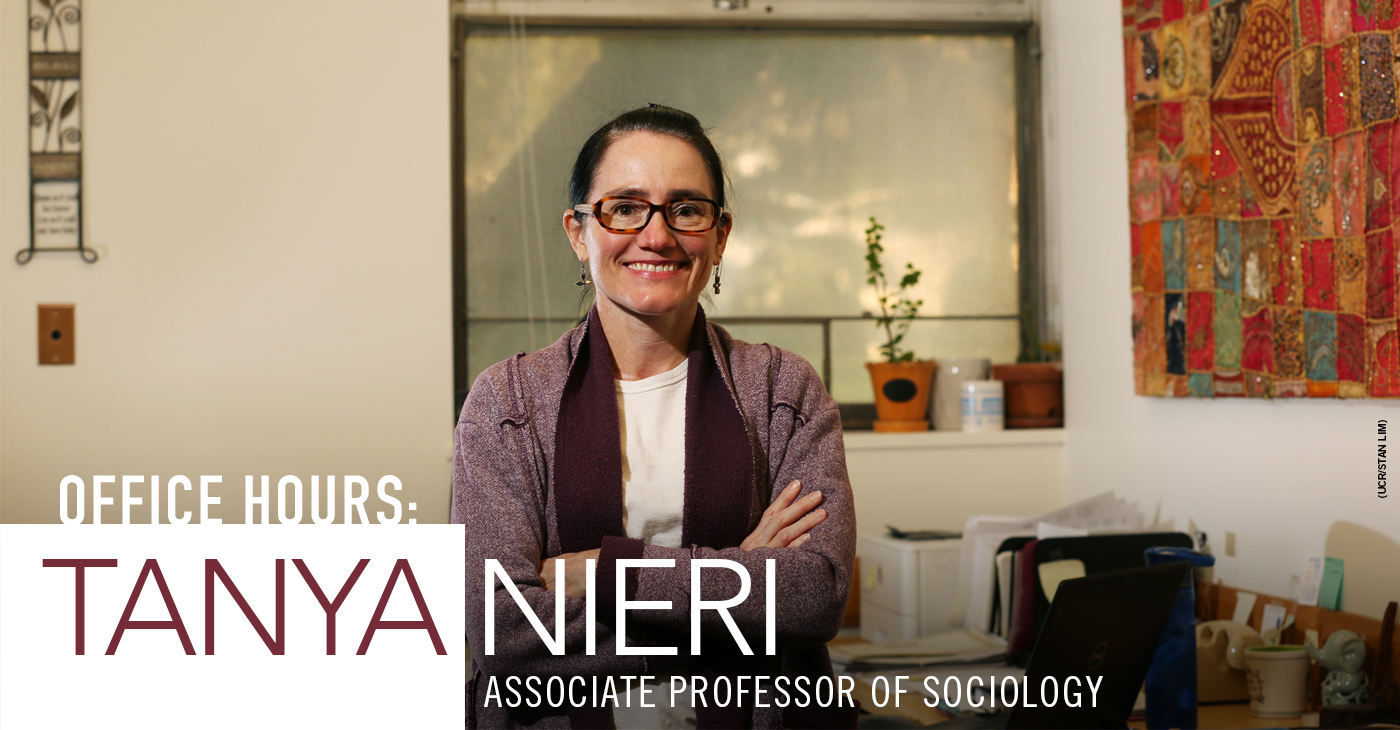 Cultural understanding and appreciation are key to this sociologist’s work.

Associate Professor Tanya Nieri loves working on the first floor of Watkins Hall, one of UC Riverside’s original campus buildings erected in 1953, but the reason might surprise you.

“Watkins is one of the oldest buildings on campus, so it’s not as shiny, but it has that institutional smell — in a good way,” said Nieri, 49. “It smells like a university, and I love that.”

The Phoenix native has been teaching at UCR for 11 years, joining the Department of Sociology in 2008. Her research is centered on health disparities and criminology, with a focus on immigrant health, infant feeding, substance use, and adolescent risk behavior.

Nieri received her bachelor’s degree in political science from Columbia University in 1992. She was inspired to go to college on the East Coast by the characters from her Judy Blume books who “were always in New Jersey and would always talk about being able to see the city lights,” she said.

She earned a master’s in sociology from Arizona State University in 1998 and was hired as a research coordinator while earning her doctorate, which she received in 2007. Nieri went on to teach graduate courses for a year before finding a home at UCR.

“California always felt like home away from home, and I have a great appreciation for the American Southwest, so I knew I wanted to stay in the Southwest,” she said.

In addition to teaching undergraduate and graduate sociology courses, Nieri often collaborates with faculty members on interdisciplinary research projects. She is working with Ann Cheney, an assistant professor in residence at the School of Medicine’s Center for Healthy Communities and Center for Health Disparities Research, on a federally funded project looking at infant growth in low-income communities. “Grow Well” is a collaboration with Early Head Start aimed at better understanding the attitudes and behaviors associated with infant feeding.

“We know what to feed babies and when to introduce what, but what we don’t know as much is how we feed kids and how that relates to infant growth,” she said. “Early evidence suggests that rapid infant growth is a risk factor for obesity. That’s what we’re trying to understand.”

According to Nieri, many government programs are modeled after the idea of a nuclear family and operate under the assumption a family has two caregivers, a very European model that does not acknowledge the norms of other cultural groups, including Latino communities, where definitions of family may be broader.

“That’s the focus: not just culturally grounded prevention (of obesity), but also acknowledging how existing interventions have legacies of culture in them that aren’t necessarily explicit and maybe need to be reexamined to better address current client demographics,” she said.

Although not Latina herself, the bulk of Nieri’s research centers on Latino communities. She has a strong appreciation for cultures from all over the world — as evidenced by the array of objects found in her office from far-ranging places such as Spain, Turkey, Korea, and India. Nieri said she credits her mother and growing up in the Southwest with exposing her to different ethnic groups. Cultural events in Phoenix, she said, had strong representations of Mexican culture and drew many attendees from Latino communities.

“The richness of the community in which I lived, but also this idea of actively participating in it and paying attention to it, always made me curious about other groups and how they live,” she said.

When teaching, Nieri said she attempts to engage students with topics and assignments relevant to their lives. A particularly popular course centers on juvenile delinquency, something she said almost everyone has experience with in some way or another.

“We talk a lot as professors about how we can learn from our students, and students bring knowledge to the class, but in those classes it’s really very clear that they do,” she said. “They bring knowledge because it’s lived experience.”

With her course load and various research projects, Nieri spends a lot of time in her office and on campus. In addition to meeting students in her office, she has team research meetings in her project office next door. She is also involved with UCR’s Healthy Campus group and will sometimes have walking meetings with students around the lawn outside Tomás Rivera Library, which is visible through her office window.

Outside of UCR, Nieri enjoys spending free time with her husband and son, often hiking, biking, and engaging in other outdoor activities. She also loves music and dancing, noting she met her husband in a Latin dance class while she was working at Arizona State and he was a graduate student.

The family enjoys yearly trips to India to visit her husband’s family in Karnataka, a state in the country’s southwest region. Nieri said her own lived experience as an intercultural family and her efforts to learn about her husband’s culture have helped her ensure her research remains grounded in authenticity.

“I’m a white woman, and I study Latinos,” Nieri said. “What scholars tend to do is they advance their careers focusing on the problems of other people, and that can be really problematic. It’s important to be mindful that the communities I work with and enable me to do my work are filled with whole people.” 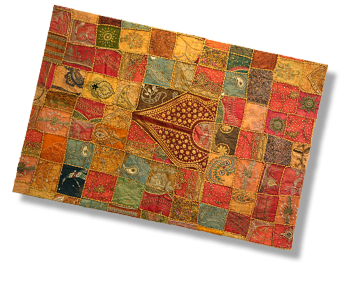 Nieri got this piece of art, displayed prominently above her desk, while in India. The artwork is from the Kashmir region and made up of fabric scraps from traditional Indian clothing sewn together to form unique patterns. According to Nieri, these pieces are found in U.S. homes more than those in India. “While it’s basically a quilt of discarded fabric, it makes for a beautiful piece of art,” she said. 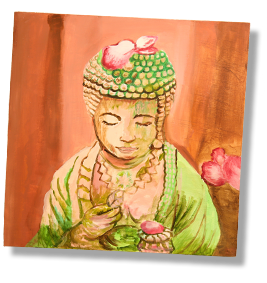 This piece was painted by the mother of one of Nieri’s former graduate students. The student’s mother had dementia and was instructed to paint, a common practice for patients as research suggests that creating artwork is beneficial for those with dementia and Alzheimer’s disease. Nieri said her student offered to have his mother make her a painting as she had been making so much art that his family was running out of space for it in their home. Nieri provided a greeting card with the image of a Buddha statue and received this painting as a result. 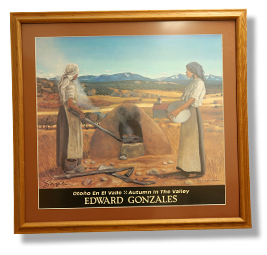 Nieri purchased this print of a painting by artist Edward Gonzalez while attending a conference about culturally grounded health promotion in New Mexico. The conference was mostly for health practitioners, but Nieri was invited to share her research about substance-use prevention in children. “When you’re dealing with health or criminology, the challenge is always to show that people are more than the problems they may be facing,” she said. Nieri was compelled to purchase this piece as she felt it was representative of her research, which focuses on Latino communities in the Southwest. 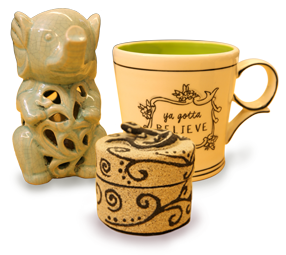 Many of the items in Nieri’s office are gifts, including this selection, which all came from students. The small container with the lizard design was made in Spain, where a former undergraduate studied abroad and subsequently spent several years working and teaching. The elephant was given to Nieri by a student she worked with on a research project. The mug came from a student facing some personal challenges, with the phrase “ya gotta believe” becoming a kind of mantra for her.