THE KING OF HAIR

How Alan Bauman ’91 became one of the world’s top hair transplant surgeons. 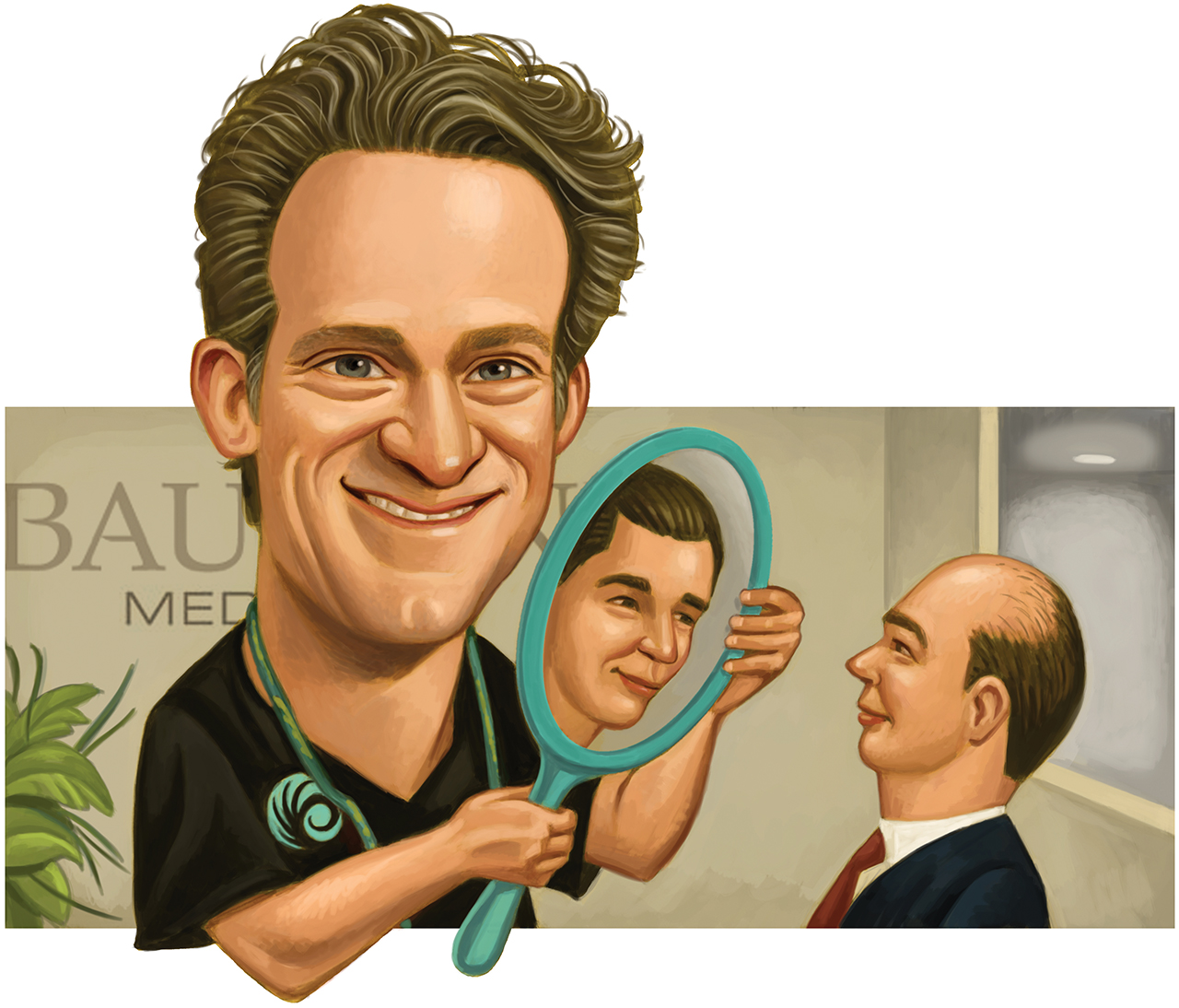 Dr. Alan Bauman ’91 is one of the top hair transplant surgeons in the world, but his career path was an unexpected one that even family members questioned at first.

“When I told my parents, and even my friends, I’m thinking of doing hair transplant surgery, they said, ‘You’re going to do plugs — What?’” he recalled.

For Bauman, 51, a defining moment came in the 1990s during his medical residency at what is now Mount Sinai Beth Israel Medical Center in New York City. He met a patient who recently had hair transplant surgery, and Bauman couldn’t tell where the transplants began.

“What stuck with me was the way he explained the impact of the hair restoration on him psychologically — how it changed his life, his confidence, his career, his complete outlook,” Bauman said.

As a medical resident, he handled extensive suturing for patients with severe cuts and assisted with cosmetic reconstruction when needed. Already interested in the artistic side of surgery, Bauman found a surgeon in Long Island who performed hair transplants and began observing him during his off-hours.

“The more I learned about it, the more I felt it fit with my personality and my skills and artistic abilities,” he said.

Bauman grew up in Watchung, New Jersey — about 30 miles west of New York City. He chose UC Riverside after being accepted into the biomedical sciences program. He later changed his major to psychobiology, which allowed him to study science and medicine. A video editing class also proved useful later in his career when he began posting videos of hair transplant procedures on YouTube. A member of the Phi Delta Theta Fraternity, he credits the Greek-letter organization with instilling in him a sense of philanthropy and a desire to train for leadership roles.

Bauman began his own hair loss practice, Bauman Medical, in Boca Raton, Florida, in 1997. Since then, he has performed over 10,000 hair transplant procedures. During his training, surgeons began using smaller, more microsurgical grafts than earlier versions. But extracting a long strip of scalp was still required to harvest hair follicles, which left scars. Bauman helped pioneer a minimally invasive technique called “follicular unit extraction” in which grafts are harvested separately, as little as one at a time. The procedure, which requires a shorter recovery time, involves no scalpels, stitches, or staples — and no scarring.

In 2007, Bauman introduced new advances that tripled the speed of extracting and implanting strands of hair. He’s become a sought-after expert on hair transplants and care, appearing on hundreds of shows such as “Today” and “Good Morning America.” In 2018, Forbes named him one of the “Top 10 CEOs Transforming Healthcare in America.” Bauman is repeatedly asked for his expert opinion on Donald Trump’s hair, and he believes the former president has had work done, as has President Joe Biden.

“For the first time in history, we potentially have two consecutive presidents who have had hair procedures,” he said.

Bauman is not surprised people are fascinated by hair, recalling the life-changing impact it had on the patient he met nearly 30 years ago. More people have the time and resources now to address their hair loss, he added.

“Psychologically, it makes you feel great. It doesn’t matter if you’re a CEO, a news anchor, a politician, an entertainer, or just a regular guy or gal who thinks they look better with hair,” he said. “If you want to exude youth, a thick, full head of hair obviously does that.”