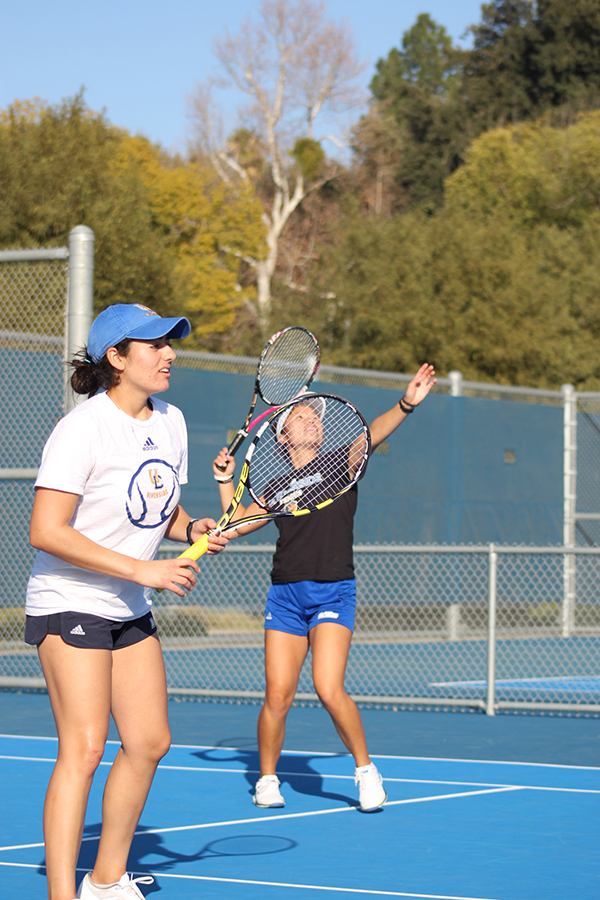 Why the best women’s doubles team in
UCR history had to invent an unusual maneuver.

ackhand. Smash. Volley. Lob. These are familiar terms from the sport of tennis. But what about the — armadillo? If you’ve ever seen the UC Riverside women’s doubles team of Sara Khattab ’20 and Tia Elpusan ’21 take the court, you might recognize the maneuver invented by Khattab to protect herself from Elpusan’s powerful forehand.

“Sometimes, I can’t run out of the way fast enough, so I just drop to the floor,” said Khattab, 22, chuckling. “I’ve got to get down low, so she doesn’t hit me.”

Elpusan’s powerful baseline shots and Khattab’s nimble net game have proven unstoppable for much of their career as Highlanders, during which time they have racked up a UCR record 32 doubles wins. They broke the single season doubles record for wins in 2018-19 with 15. But the duo’s history goes back much further than their time at UCR. Khattab and Elpusan have known each other since they both attended Miraleste Intermediate School in Rancho Palos Verdes, but they ran into each other at tennis clinics and tournaments before that.

“I specifically have a memory of playing doubles against Tia and this other girl,” said Khattab, who was a grade level above Elpusan. “Me and my partner were really scared to play her. I’m pretty sure you guys beat us.”

They grew closer as friends and teammates at Palos Verdes Peninsula High School, where they each joined the tennis team as freshmen. They became doubles partners toward the end of Khattab’s senior and Elpusan’s junior year in 2015, and went on to win the California Interscholastic Federation Southern Section doubles title that season. During her first year as a Highlander, Khattab kept in touch with Elpusan and said she should consider coming to UC Riverside as well. But UCR was already on Elpusan’s radar thanks to her aunt and uncle, who were alumni. While they’re used to crushing opponents as partners on the court, Khattab and Elpusan are fierce competitors when it comes to their favorite off-court activity, playing “Just Dance” on Nintendo Wii, though Khattab concedes her teammate usually comes out on top. However, she notes the game and console live at Elpusan’s house.

“She has the home advantage,” laughed Khattab, who is currently applying to graduate programs in applied mathematics. She hopes to perform research in mathematical biology. Elpusan is majoring in neuroscience.

When the pair were interviewed in early March, they were relishing their last weeks as teammates. Elpusan also collected the Big West Women’s Tennis Athlete of the Week award on March 11 with four singles victories over a seven-day period. The suspension of the 2020 season came as a shock to the entire team.

“It’s a bittersweet feeling,” Elpusan said. “Although Sara and I ended with a win, it was our last match together, and I was fully unprepared for that.”

Khattab said she managed to get through the heartbreak thanks to the help of her coaches and trainers, who checked in with the players regularly to see how they were doing.

“I have gained a new perspective on everything going on and how my life is affected,” Khattab said. “As the effect of the virus escalated for literally everyone in the world, I have come to realize how lucky we are to have such a strong and deep support system through athletics.”

Elpusan will be tasked with another challenge when she comes back next season: finding chemistry with a new partner. But Khattab isn’t too worried about whether it will work out.

“It’s literally so easy to be Tia’s partner,” Khattab said. “She hits so hard.”