This alumna uses her love and knowledge of music
to help preserve cultural heritage worldwide. 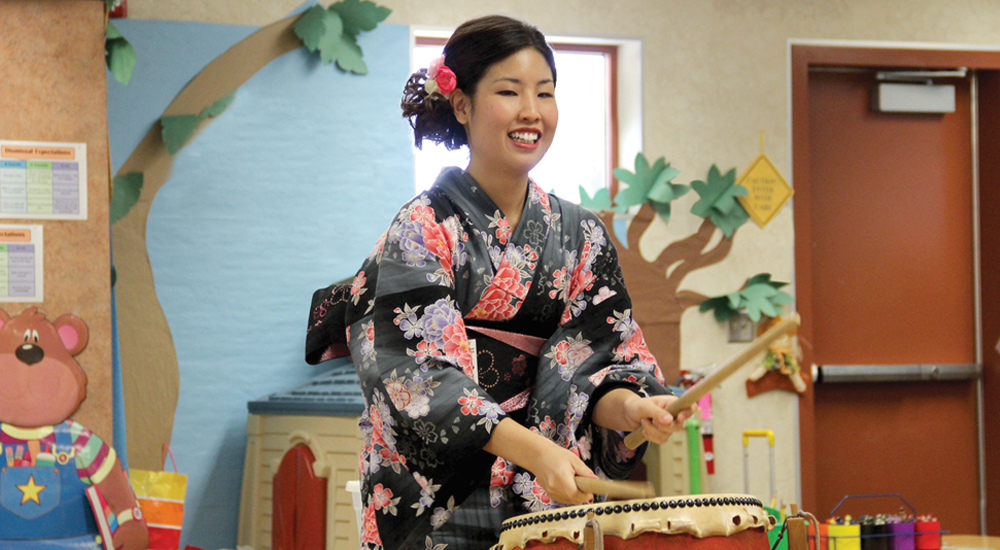 hough Nana Kaneko took piano and violin lessons as a child, it was her grandmother who spurred her interest in music from around the world — and Japanese music in particular. A fourth-generation Japanese American, Kaneko would tag along to her grandmother’s “enka” lessons — a sentimental ballad popular with older generations.

“I started to like the songs and would perform with her … when I was a kid,” said Kaneko, 31, who spent most of her childhood in Southern California.

Now Kaneko has turned her passion for music into a career many might not know exists. She is in her second year of a two-year fellowship as program manager for cultural disaster analysis at the Smithsonian Cultural Rescue Initiative, or SCRI, in Washington, D.C. The organization was established in 2012 following the devastating earthquake in Haiti to protect and preserve the cultural heritage, identities, and histories of global communities threatened or impacted by disasters.

Though she wanted to be a film composer while studying music at New York University, her undergraduate adviser suggested pursuing ethnomusicology and recommended UC Riverside. Still unsure about what to study after her graduation in 2010, she began applying to graduate schools when Japan was struck by a magnitude 9.0 earthquake in March 2011. The largest quake in the country’s history, it triggered a devastating tsunami and subsequent nuclear disaster in Fukushima.

“It kind of hit me that there’s going to be a lot of musical responses to the disaster,” Kaneko said. “That initially sparked my dissertation research.”

She came to UCR and began researching the Japanese folk music genre “minyo,” working closely with Professor Deborah Wong. Kaneko became involved in the local Japanese American community, joining the UCR taiko drumming and gamelan ensembles and learning how to play the shamisen — a three-stringed lute instrument. She also took vocal lessons with a local minyo master and performed at community events. As a Gluck Fellow at UCR, Kaneko led Japanese folk performance workshops primarily for local elementary students. When she finished her master’s program in 2014, Kaneko travelled to Sendai, a city in Japan’s Tohoku region, where she spent two years conducting research for her doctoral dissertation. She attended several folk festivals and followed performance troupes, discovering these activities became a way for people to reconvene after the disaster.

“Music is really a powerful tool for bringing communities together, allowing them to redefine their identity following the trauma of a disaster,” she said.

As part of her work with SCRI, she has conducted demonstrations in South Carolina and Nebraska on how to salvage family heirlooms, and helped run a workshop in Kyoto, Japan, on ways to document and safely evacuate museum collections during disasters. She also traveled to the Bahamas shortly after Hurricane Dorian.

“That experience really gave me a sense of what’s involved in a cultural recovery mission,” she said.

“With the intangible, it often comes back to the tangible, ironically,” she said. “It’s the resources that these people need, spaces to perform.”

In the wake of COVID-19, Kaneko is studying the effects of the coronavirus on cultural institutions and intangible cultural practices. This will help SCRI develop resources to improve museum preparedness protocols for future crises. She meets Wong for lunch in Washington whenever her former professor is in town. Wong sits on the Smithsonian Center for Folklife and Cultural Heritage’s advisory board.

“Deborah is like a second mother,” Kaneko said. “She’s always gone above and beyond, and for that I am forever grateful.”