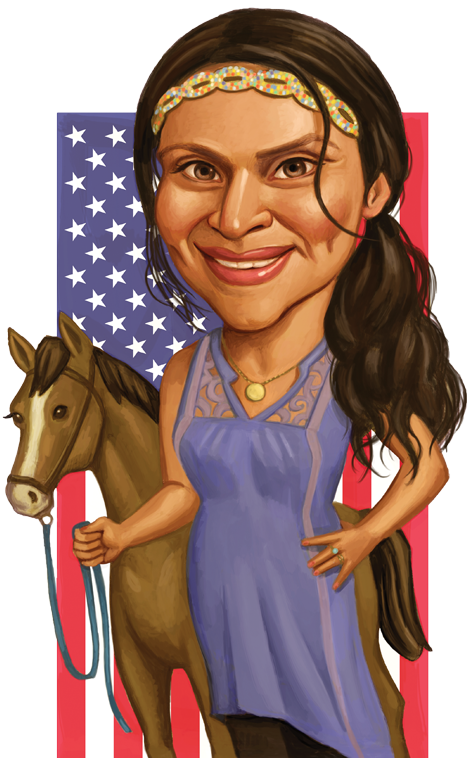 Resilient, brave, undaunted. These words describe many a veteran who has served our country.

Years ago, they could also be used to describe the horses who accompanied them into battle. While most of these animals have been replaced by tanks, planes, and helicopters, horses are still proving useful to soldiers by helping them heal after they come home.

Amy McCambridge ’09 and her husband, Mark Steppe, both veterans dealing with health issues, have dedicated their lives to connecting ailing former soldiers with horses.

The couple, who live in Ridgewood, New Jersey, got the idea after visiting a nearby horse farm in 2016. They found themselves drawn in by the elegant beauty of the animals, from the sound of their whinnies to the gallantry of their steps. So they asked the owner if they could help out around the farm.

“My husband and I just started feeding the horses, working on the fences … or doing some brushing of the horses,” said McCambridge, 40.

It wasn’t long before she and Steppe started to feel positive emotional and psychological changes as a result of their interactions with the animals.

“There was a rapid positive shift in our relationship and our ailments,” McCambridge said.

Steppe, who served in the Army from 2000-06, sustained serious mobility injuries while stationed in Iraq. McCambridge, who has been diagnosed with post-traumatic stress disorder, served stateside during her four years of active duty in the Marines. Given their newfound connection to horses, the couple
wanted to return the favor to other veterans in need.

Known as the Unbridled Heroes Project, and based at a farm in Allendale, New Jersey, the nonprofit allows veterans to work with horses in many different ways. Roughly 20 veterans have participated, working with a total of seven horses.

“For some veterans, they will be taking care of and riding the horses and meeting regularly,” said McCambridge, who co-founded the charity with her husband in September 2018. “For others, it may be just coming around more when they feel like it. This is a place of refuge for them, and we don’t want to pressure them when maybe they aren’t ready to be anywhere regularly.”

McCambridge recalled a particular horse who was shy around the newcomers. She asked one of the vets, who didn’t visit that often, if he might have the charm to bring the horse around. Sure enough, it worked. That, McCambridge said, epitomizes the magic that’s possible when working with horses.

“I could just see the effect he had,” said McCambridge, who also works as a soccer coach. “That bond — it’s uplifting for both.”

Often it boils down to making a match, because the highly intelligent animals have personalities and preferences all their own, she said.

McCambridge’s affection for horses is so strong that she also tries to save as many as she can.

“Recently, we were able to be a part of a rescue,” she said. “I see a horse mistreated, and I’m always thinking, ‘How do we get them out of there?’ I’m reminded I can’t save them all.”

McCambridge said UC Riverside played an important role in developing the compassion she exhibits today. Having started college after her discharge from the Marines as a divorced mom with a 4-year-old son, she said there were times when she didn’t believe she would ever make it to graduation.

But multiple professors encouraged her to keep going, telling her she shouldn’t give up.

“That’s what they kept saying to me in their own way,” recalled McCambridge, who majored in political science. “They helped me believe in myself, and I really needed that.”