Illustrations by The Brave Union

The spirited search for an insect that could save your syrah.

hen describing Mark Hoddle, it’s easy to think of him as the Indiana Jones of the entomology world.

And it’s not just because of his shirt.

This summer, he led a team of UC Riverside researchers on a 600-mile journey to Southern Arizona, where the group trekked 5,500 feet above sea level to a remote “sky island” to find an elusive insect that almost no one has studied.

Why go all that way to look for a tiny bug? Because it could be the key to controlling a looming threat to much of California’s agriculture — including its wine, nuts, and avocados.

That threat is the inevitable westward spread of the Chinese spotted lanternfly, which has already caused massive damage to grape vines and other plants on the East Coast. The fly sucks fluid from plants and secretes a sticky substance called “honeydew” that encourages the growth of black, sooty, crop-destroying mold.

Typically, officials wait until after a pest has already started to cause problems before they develop biological control programs. Rather than spraying with insecticides, these types of programs use other insects — an invader’s natural enemies — to keep the pest in check.

Hoddle, director of UCR’s Center for Invasive Species Research, decided he didn’t want to wait until the spotted lanternfly begins damaging our favorite foods and drinks to take action.

With financial support from the California Department of Food and Agriculture’s Office of Environmental Farming & Innovation, he’s leading the charge to develop the state’s first proactive biocontrol program. 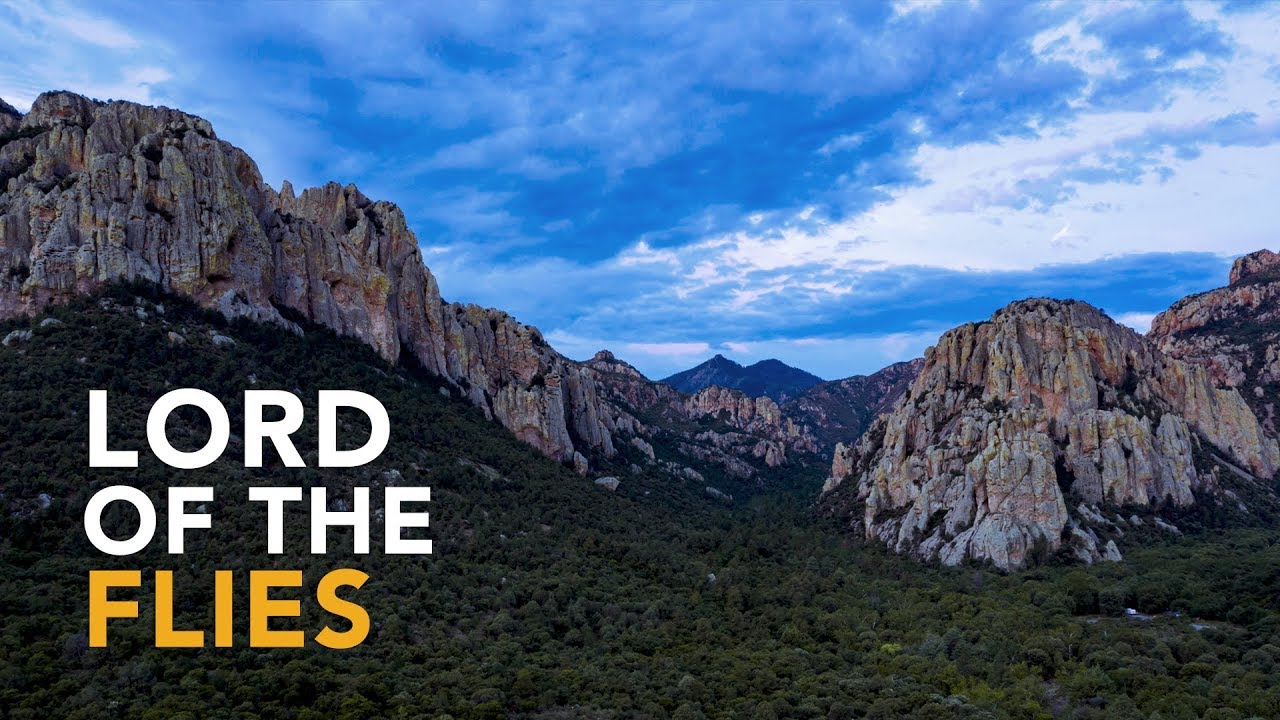 Before a pest’s natural insect enemy can be released into our collective backyards as a biocontrol agent, researchers have to be certain it won’t damage local ecosystems. In this case, Hoddle and the team have to make sure the agent doesn’t pose an undue threat to native West Coast lanternflies.

A known natural enemy of the spotted lanternfly in China, its native area, is a sesame-seed sized wasp called Anastatus orientalis, which is already waiting at UC Riverside’s quarantine facility for testing. What the team doesn’t have are native lanternflies from the southwestern U.S.

Because they pose no threat to humans or agriculture, these flies have never been formally studied. No one is sure what plants they feed on, so finding them in nature will be a challenge.

Hoddle, who was born in New Zealand, has earned comparisons to the famed silver-screen archaeologist by traveling to far-flung places such as Pakistan, Guatemala, Indonesia, Peru, Mexico, and Saudi Arabia to gather insect samples for similar pest control programs benefitting California’s agricultural, urban, and wilderness areas.

To put Yanega’s expertise in perspective, consider that there are an estimated 10 million insects on the planet, less than 2 million of which are “known species.” Yanega can identify about 90% of them, including those that have never been ID'd before, to the rank of family or better. There are likely fewer than 10 people on the planet who could even approach that breadth of expertise.

“He’s really invaluable to this project,” Hoddle says. “There’s no way either Francesc or myself could identify immature lanternflies by sight in the field, but Doug can do it in seconds.”

Comin’ ’round the mountain

The team has assembled in the tiny town of Portal, Arizona, which sits on the eastern side of the Chiricahua Mountains. They’ve come here at Yanega’s suggestion to find native lanternflies and learn whether the Chinese wasp in quarantine at UC Riverside will attack them.

The area is known as a sky island due to its isolation, high elevation, and radically different ecology and climate compared to the lowland deserts surrounding it.

The researchers will eventually continue looking for related species of native lanternflies in California, but the ones in Arizona are comparable. Although the flies’ preferred plant hangout is unknown, entomologists have accidentally caught flying adults in these mountains at night while out looking for other species, Yanega says.

It doesn’t take long for the extreme climate difference to become apparent. Less than an hour after leaving the airport, one of the rental cars blows a tire in the 107-degree Phoenix heat, where the asphalt is likely more than 160 degrees.

When the team arrives at Portal Peak Lodge three hours later, the sky darkens considerably, the temperature drops to a balmy 74 degrees, and the first few drops of a monsoon start to fall.

A sweet mountain breeze brings a little extra relief from the sweltering heat of the desert below, but calm quickly turns to panic as flashes of lightning shoot across the darkening sky and sheets of rain begin to fall. 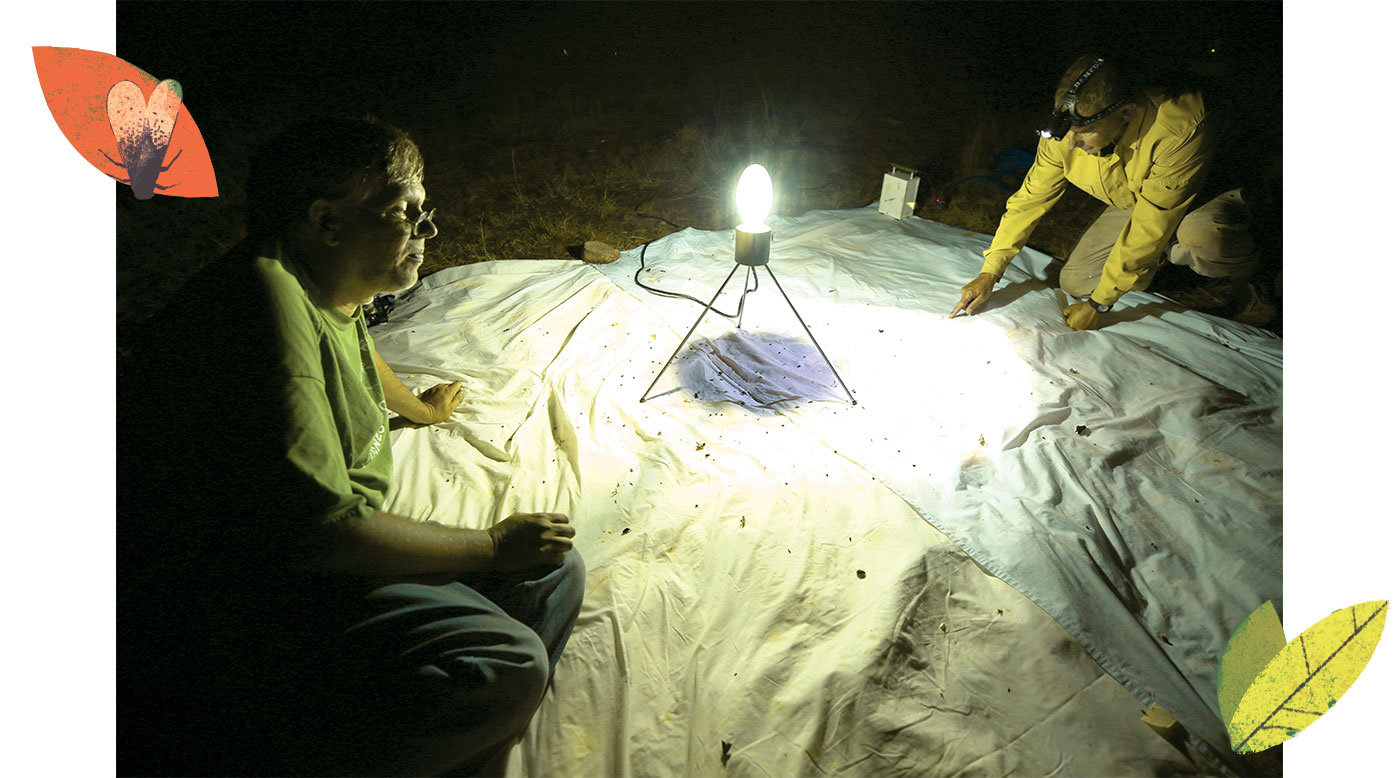 Blinded by the lights

Bugs, much like humans, don’t like to come out when it’s raining. Aside from being cold, they could be hit by a giant rain drop and die.

But just as quickly as they started, the rains let up, so the crew opts to set up nighttime traps — bug-attracting black lights and a large mercury vapor light connected to flight-stopping bug tarps.

Later, the group heads to the ne arby Southwestern Research Station, run by the American Museum of Natural History, where people from around the world come to study the amazing diversity of flora and fauna in these unique mountains. With headlamps donned and foam earplugs inserted to keep bugs out, they set out down dark dirt paths through the oak, pine, and juniper forest.

The experience of traversing unknown woods amid the glow of black lights emanating from the darkness is reminiscent of attending an underground rave in the 1990s — an ambience amplified by the red beams shining from the scientists’ headlamps.

They use black and mercury vapor lights because insects and other night-flying animals rely on the ultraviolet light reflected by the moon to help them fly in a straight line in the dark.

“By having a UV-emitting artificial light source on the ground, you screw with their navigation system,” Yanega explains.“ Then they hit a tarp where we’re waiting with jars, ready to catch them.”

The sound of insects hitting the tarp is like that of microwave popcorn cooking.

“Some of them seem to become intoxicated on the UV light,” Hoddle adds.“ After they land, they just sit on the tarp soaking it up. You can turn the lights off, and for several hours they’ll just sit there looking comatose.”

The light traps lure bugs by the hundreds on this night, but unfortunately, there’s not a lanternfly among them. The team decides to pack it in early and get some sleep before heading out at 5:30 a.m. to attempt another eerie method of lanternfly trapping. 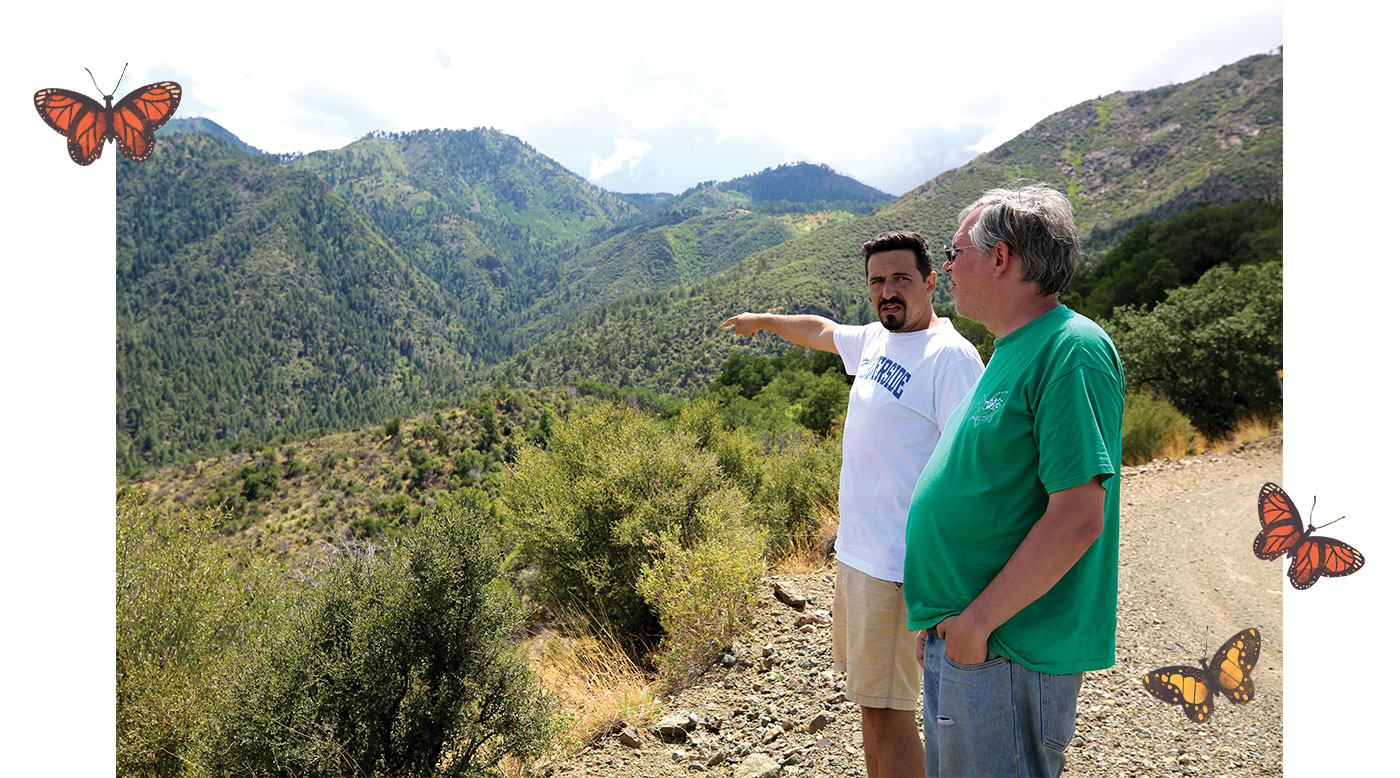 Postdoctoral scholar Francesc Gómez-Marco points to an area within the “sky island”
of Portal, Arizona, as Doug Yanega looks on. (UCR/Jules Bernstein)

It may seem strange that scientists use pesticide fog to catch insects for a biocontrol program, but Hoddle notes the fog mixture is simply an extraction from chrysanthemum leaves with an extremely short residual lifespan.

“It disappears in about 50 minutes with daylight and has no effect on birds, humans, or other creatures,” he adds.

However, because they’ll be in the thick of the fog, he and Hoddle still don full moon suits with gloves, respirators, and goggles as they mix the poison with water before spraying. Meanwhile, white plastic tarps are placed on the ground to collect insects as they fall from the trees above.

Yanega, sans suit, comes on scene to identify the insects“ as the bodies hit the floor,” he jokes.

If they catch a native juvenile lanternfly on the tree being sprayed, they can be reasonably sure they’ve found the insect’s host plant.

Though the adult lanternflies have wings, they jump more than they fly, and the younger ones cannot fly at all. If a young nymph is on a tree, it was likely born there.

So far, Yanega has identified at least one nymph on a juniper tree. This is good news, because now the team knows where to keep looking.

What they would love to find are lanternfly eggs, either by capturing a male-female adult pair using the black lights and getting them to mate and lay eggs, or by serendipitously finding egg masses on host plants.

The Anastatus wasp uses a needle-like appendage to lay its own eggs inside the spotted lanternfly’s eggs. While developing, the wasp larvae eat and kill their hosts, emerging after chewing escape holes through the lanternfly eggs.

“We need to have fresh lanternfly eggs in the lab that we can expose to Anastatus to see whether they attempt to use those eggs for their own breeding,” Yanega says.“ You give the wasps a choice between (the spotted lanternfly) and the native lanternfly eggs. If they don’t go to the natives, you know they’re not going to present a risk to these nontarget species.” 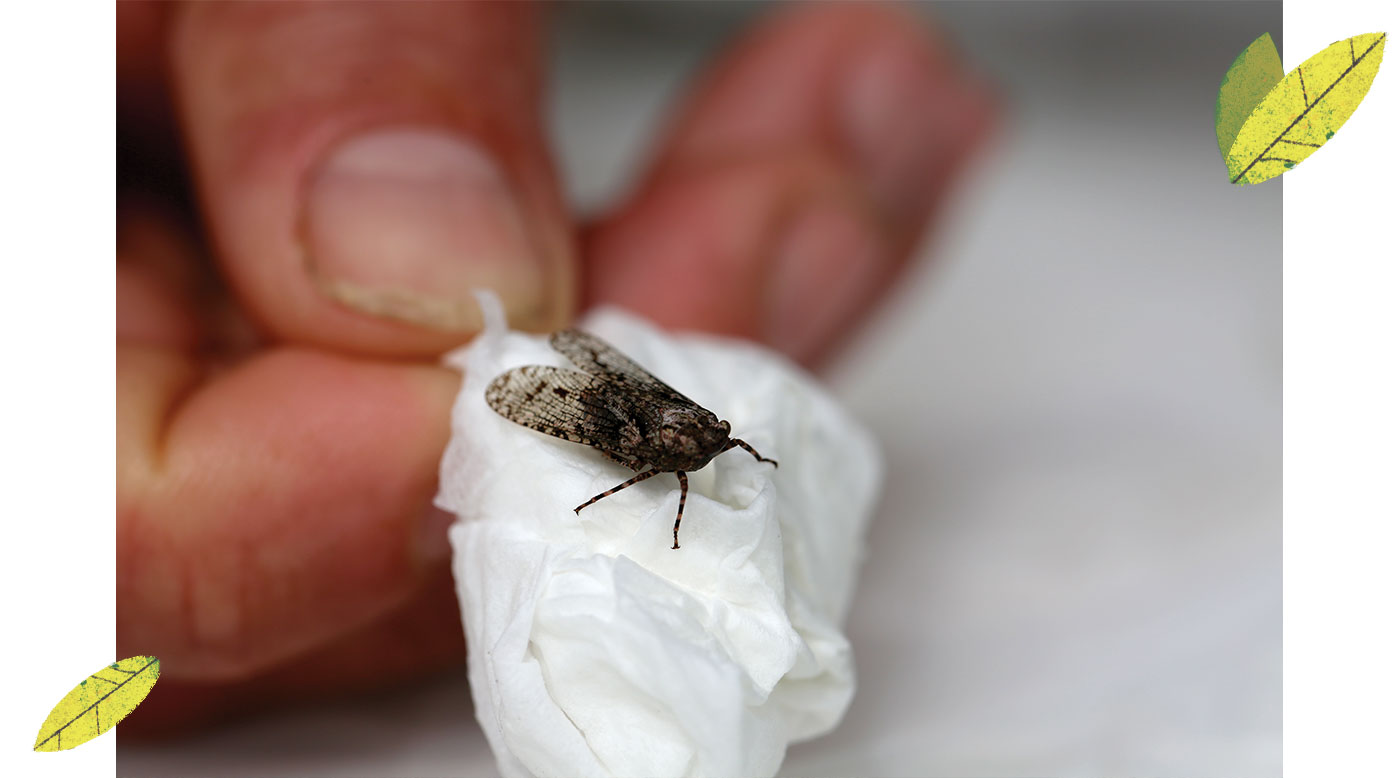 A native lanternfly identified by the team. (UCR/Jules Bernstein)

There is generally a lull on trips like these between the early morning fogging and the late-night black lighting.

During one such time, Hoddle explains that humans are mostly responsible for spreading spotted lanternflies, as is the case with most insect invasions. Though insects cannot fly far on their own, they often land on vehicles or pallets that get shipped across state lines. Even weed seeds stuck to your shoelaces after a hike can accidentally bring invasive species into new places.

“We mop up the mess,” Hoddle says.

Around 11:30 a.m., the sky turns nearly black, announcing the imminent arrival of another monsoon. In the research center’s rustic library, Gómez-Marco takes care to distinguish the realities of field work versus research in an air-conditioned lab or office.

“You have to be outside in all types of weather, crawling on the ground, climbing trees, and rolling out tarps at 5:30 a.m. We have an important mission here, and we are working hard to achieve it,” he says while thunder shakes the building as if to underscore the point.

“We’re making an honest attempt to do something positive here,” he says.“ We’re not guaranteeing success, but we’re doing our best to continue a tradition of successful biological control research established at UC Riverside’s entomology department.”

Later that night, the black-lighting session evokes the Cantina scene from“ Star Wars,” the light attracting a mix of creatures at once thrilling and bewildering in their strangeness: jeweled beetles, gigantic furry moths, and flying things in all manner of shapes, sizes, and colors.

Yanega, clearly in his element, lies among them in jeans and a T-shirt, grabbing the insects with his bare hands and identifying species previously unknown to science.

Finally, the moment the team members had been hoping for arrives: Adult lanternflies are found among the mass of bugs. They are promptly captured and prepped for experiments the following day.

Once they leave the sky island, the team will hunt for two other lanternfly species native to the southwestern U.S. — one that feeds on bushes in the southern Arizona deserts, and another near Palm Springs that feeds on piñon pine.

But before the next stage of their adventure begins, Hoddle pronounces the first leg a success.

“We had four goals this week: to determine the host plants that lanternflies feed on — check; capture adult lanternflies at night using black lights — check; find immature lanternflies — check; and either get the adults to lay eggs or find an egg mass — in progress,” he said.“ And this was only the third day!”

The dawn of day four begins with the sun shining down through a cloudless Arizona sky, perfect conditions for an already successful search to begin anew.

With no sign of another monsoon on the horizon and optimism backed by decades of similar missions that have ended in agricultural success, the intrepid team heads toward the trees, poised to find their lanternflies in the light.