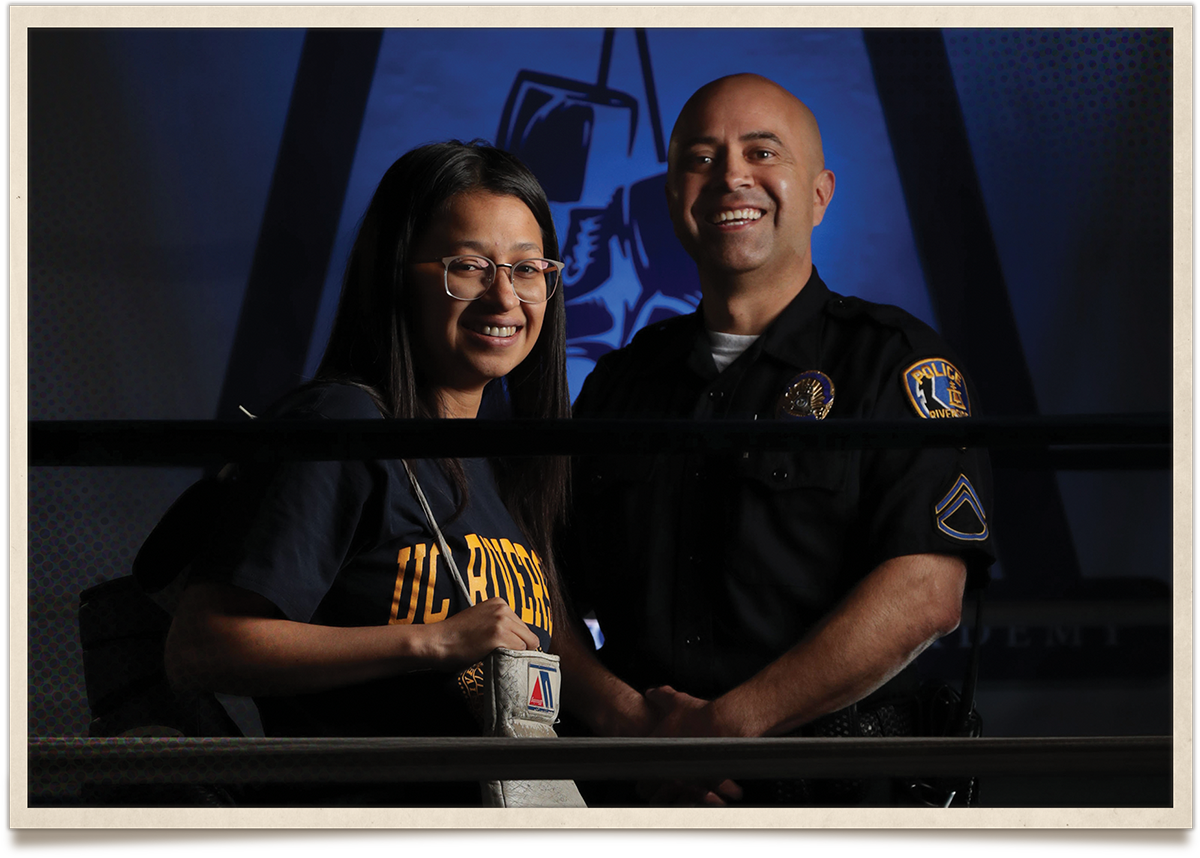 Celia Miranda ’16 and Riverside Police Detective Mario Dorado at the Raincross Boxing Academy, which they co-founded.

A RING OF THEIR OWN

Celia Miranda ’16 never let her petite figure dictate what she could do. As one of five kids, she often played the role of referee while her brothers wrestled. When she was 15, her younger brother suggested they join a boxing gym in their native San Diego. Always up for a challenge, the 5-foot-1-inch, 105-pound teenager didn’t think twice. A year later, Miranda was in a boxing ring facing her first amateur opponent.

“I ended up with a bloody nose, but I didn’t care.” Miranda said, describing her first victory.

She had four amateur fights under her belt by the time she arrived at UC Riverside in 2011. There were no student boxing clubs on campus, so she decided to start one with Bryan Pedroza ’15 called Highlander Gloves. Without a gym, the group used to practice under the softball bleachers. A few years later, Riverside Police Detective Mario Dorado was looking for a partner to help him open a free boxing gym for at-risk youth in Riverside’s Eastside neighborhood. He found Miranda through Highlander Gloves and pitched his idea to her at Starbucks. Her passion for the sport and desire to help the community gelled with Dorado’s vision. Having already earned her coaching credentials from USA Boxing, she was ready to rally UCR students to serve as tutors, mentors, and trainers. Together, Miranda and Dorado opened Raincross Boxing Academy in 2014 in a converted office space on Vine Street. By early 2020, the nonprofit had a team of about 40 UCR undergraduates, graduate students, and alumni volunteers. Before the COVID-19 pandemic, the gym was open from 5-8 p.m. every weekday. 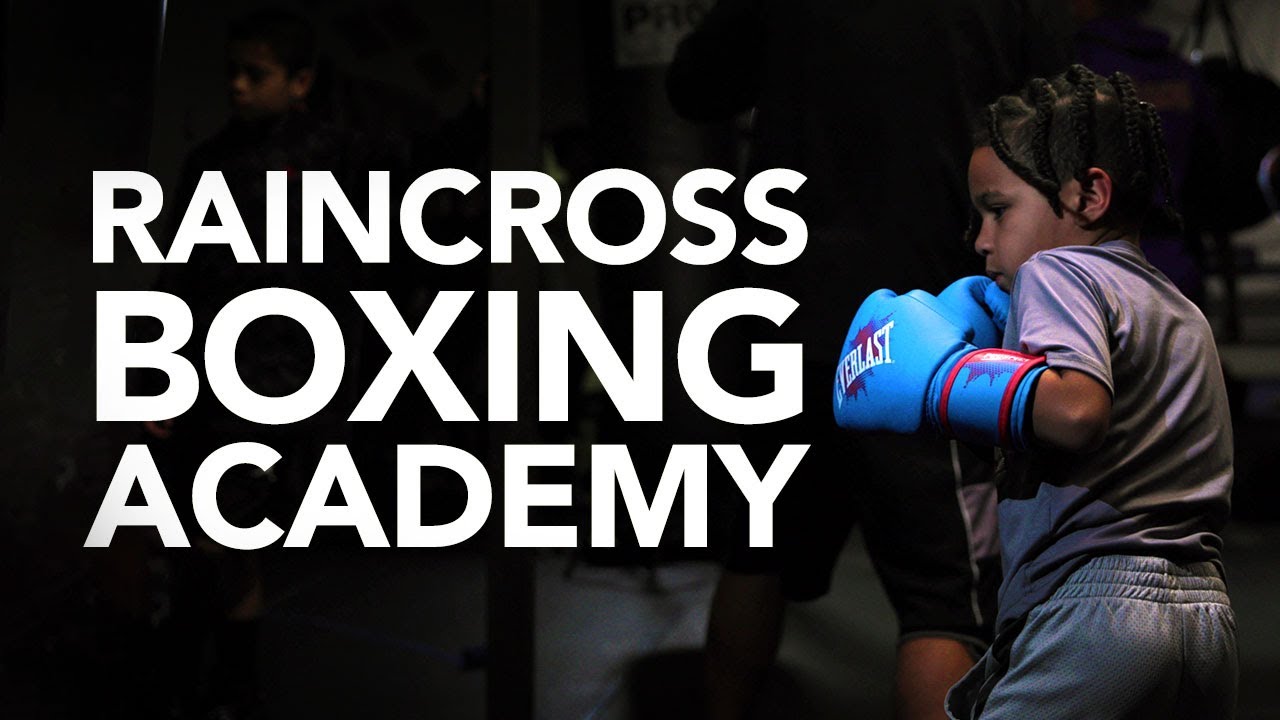 In 2019, the academy moved into a 3,500-square-foot building off of Chicago Avenue. This summer, in the midst of the pandemic, it moved into a 7,000-square-foot space in the same commercial complex. The new facility boasts two boxing rings, a larger tutoring room, and office space. The Eastside neighborhood is one of the oldest in the city, with about 17,000 residents and a median household income of less than $40,000. In some areas, gang-related violence, drugs, and challenging relationships between residents and the police department are all too familiar. Miranda and Dorado have built ties with the Riverside community to continue growing the program. In February, the Riverside County Probation Department awarded Raincross a Juvenile Justice Crime Prevention Act grant to support the educational and boxing program. During the pandemic, the volunteers offer tutoring, activities, and events featuring motivational speakers through Zoom.

“I LIKE TO WALK AROUND AND HIT THE BAG, THEN OTHER GIRLS JOIN IN. SOMETIMES WE NEED SOMEONE TO CONNECT WITH.” 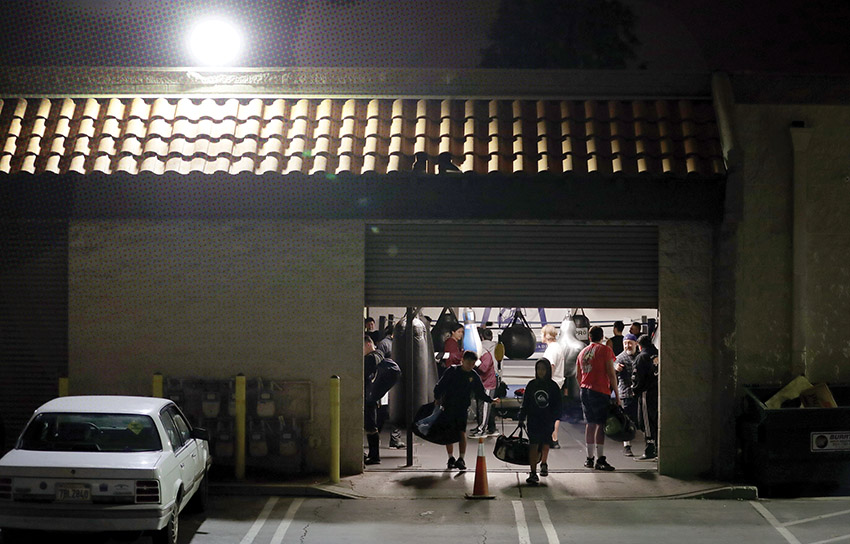 “At first, everyone was sad about keeping the gym closed, but then we ran with the idea of going virtual, and we’ve been busy ever since,” said Miranda, 26.

A political science major with a public policy concentration, her official Raincross title is CEO, though she’s not earning a salary. She also runs her own business, Raincross Barbershop in Jurupa Valley, and is working to earn a leadership and organizational excellence certificate through UCR Extension. Dorado’s primary inspiration for the gym was his father, Anthony Dorado, a former professional boxer who left school after second grade. After leaving the sport in his late 20s, the elder Dorado became an auto mechanic and often refused to charge neighbors for his work. He spent his free time at a boxing gym on the Eastside. Mario remembers being a 5-year-old and going to watch his father spar. 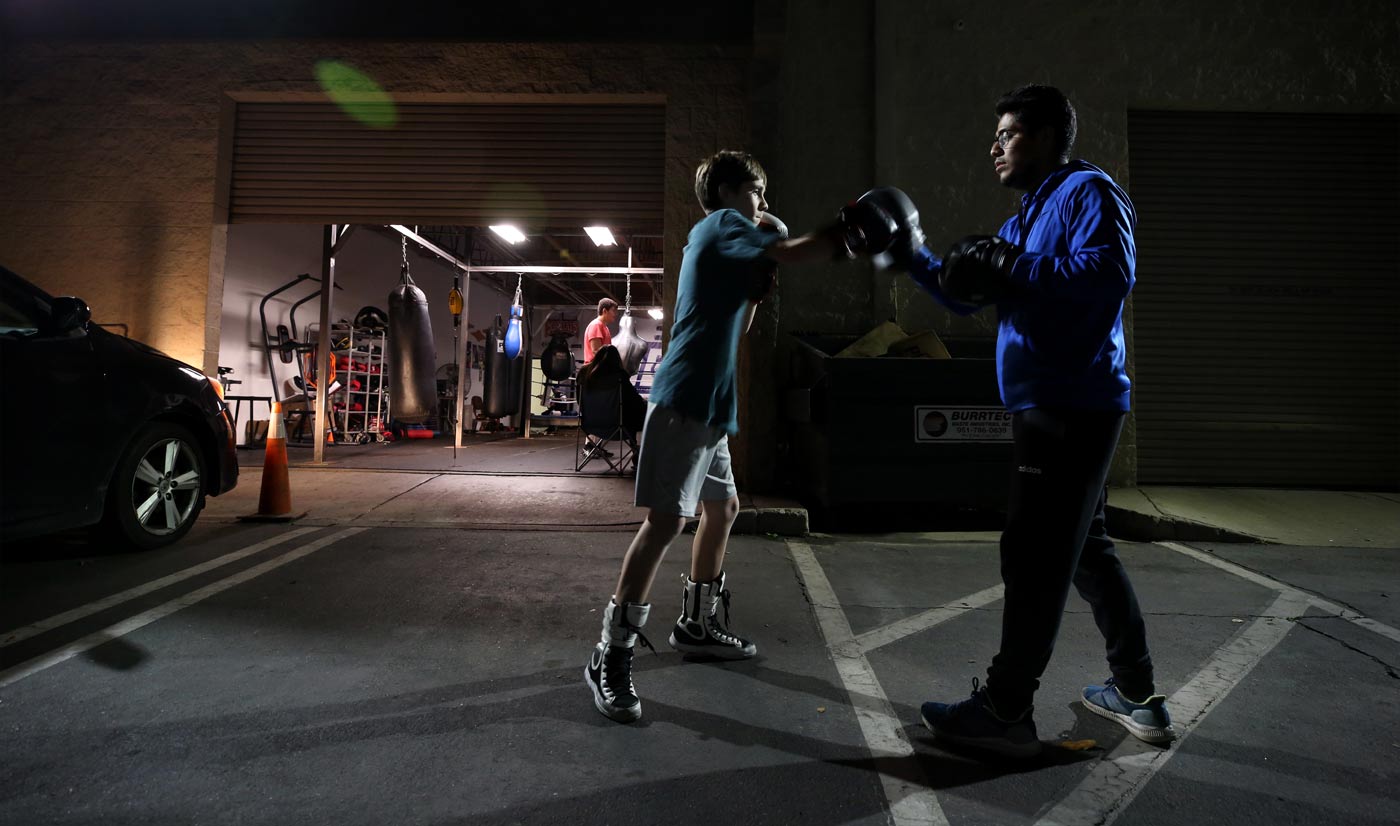 “My dad had a big influence on me,” Dorado said. “I would see him spar and workout, but also see him support programs, interact with kids, mentor them.”

Dorado and Miranda also open the gym to other local and professional boxers. Mikey Garcia, a Riverside native and a four-time world titleholder in various weight classes; and Darious Harris, a super welterweight from Rialto; are no strangers at the facility. Students are able to watch the athletes train and also ask them questions. This interaction is by design, with the aim to surround these at-risk youth with as many positive role models as possible.

“Within a 5-mile radius, there are about 15 boxing gyms, and I wanted to be different,” said Dorado, who joined the Riverside Police Department 21 years ago.

“For one year, I researched, looked for support,” Dorado said. “Now we have a team of volunteers that is very disciplined; Raincross Boxing Academy is fully staffed and regulated by young people. It’s kids’ lives at stake, and we take it very seriously.”

Dorado said he thinks of Miranda as a daughter and values her input. For Miranda, partnering with Dorado was an obvious choice. As a first-generation student, she understands the difficulties faced by low-income communities. She also understands the power and responsibility that comes with being a female boxer. When Miranda co-founded Highlander Gloves, she dreamed of having a gym where she and other students could practice. The sport might seem violent, she said, but it instills discipline, hard work, and teaches boxers to think quickly and make decisions on the spot. Walking into a male-dominated sport doesn’t intimidate her. 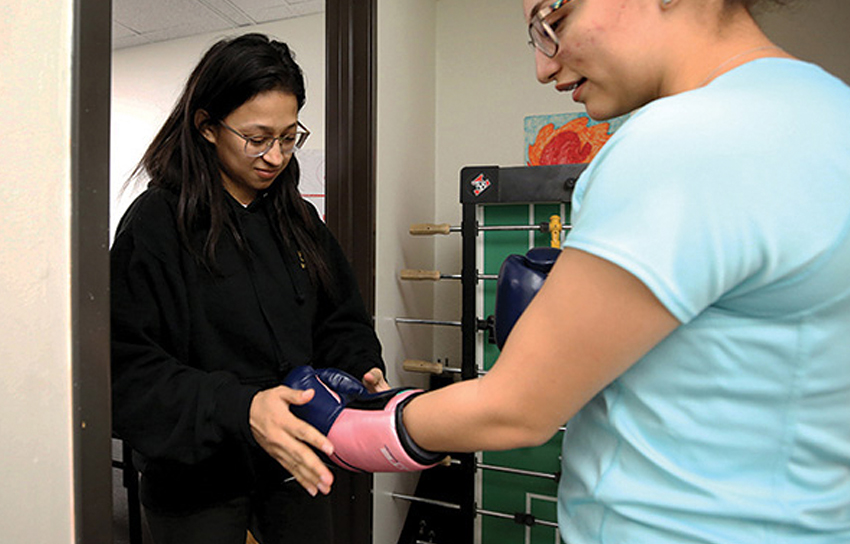 “I JUST WANTED A PLACE TO FEEL SAFE, TO TAKE OUT THAT AGRESSION I HAD AT THE WORLD WITHOUT REALLY HURTING ANYBODY.”

“I know I have to work harder to prove myself, but I can work just as hard,” Miranda said, noting her siblings have been her biggest supporters.

Knowing that many of the young girls who come to the gym feel more confident hitting the punching bags than sparring, she makes a point of joining in while walking around to greet students, give them high-fives, ask about their day, and help them lace up their gloves.

“I like to walk around and hit the bag, then other girls join in,” Miranda said. “Sometimes, we need someone to connect with.”

Among the students Miranda has helped mentor is Rosendo Cervantes, 21, who graduated from Moreno Valley College and starts at Cal Poly Pomona this fall. His younger years in the Eastside were plagued by homelessness, drugs, gangs, and a mother who often needed his care.

“I want to build houses. I want to build my mom a house so she never has to be homeless again,” said Cervantes, who has worked in construction sites alongside  his father since age 7.

Raincross became his safe haven, and it’s where he became an amateur boxer. He considers Miranda a role model.

“I just wanted a place to feel safe, to take out that aggression I had at the world without really hurting anybody,” Cervantes said. “(Raincross) became that magical place; it brought me into a good environment — and it’s free.” 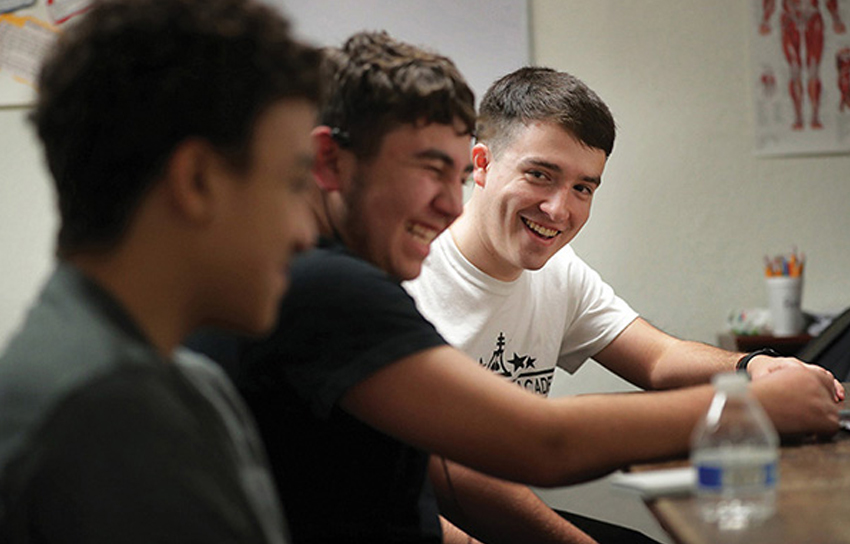 By 5:30 p.m. each evening before the pandemic, the place was buzzing with young voices asking for math and writing help. Raincross mandates that each participant do one hour of homework. The other two hours are dedicated to exercising, hitting the punching bags, or sparring for those who want to pursue amateur boxing.

“The most important things UCR taught me are time management and the importance of giving back to the community,” Miranda said.

Her own dedication is obvious to people like Christopher Garza, 21, a fourth-year UCR student who serves as the academy’s director of operations, a volunteer position that occupies 15 to 20 hours of his week.

“Celia is strong and doesn’t get intimidated in this space that is very male dominated,” Garza said. “I respect her for that. She sets high standards.”

Miranda has helped build a team of volunteers who understand why encouraging students to pursue higher education is crucial in breaking cycles of poverty and crime.

“Students need encouragement, someone to talk to them about college,” Miranda said. “I live here on the Eastside too; I see them around town and ask them where they’ve been, when I’ll see them at the gym, or how their day is going. The littlest, kindest words can make a big impact.” 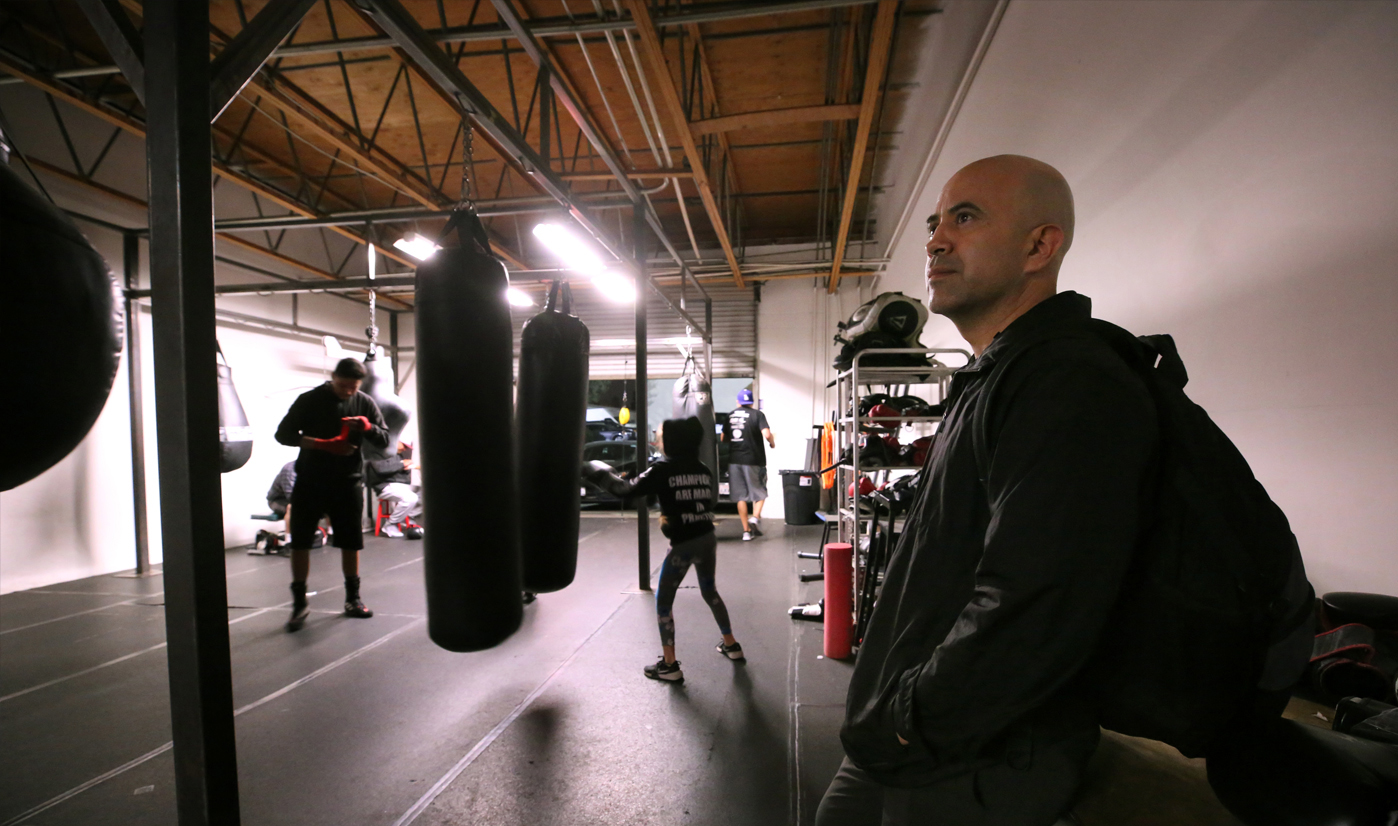