How Steven Wright ’06 is using trash to clean up the U.S.-Mexico border region. 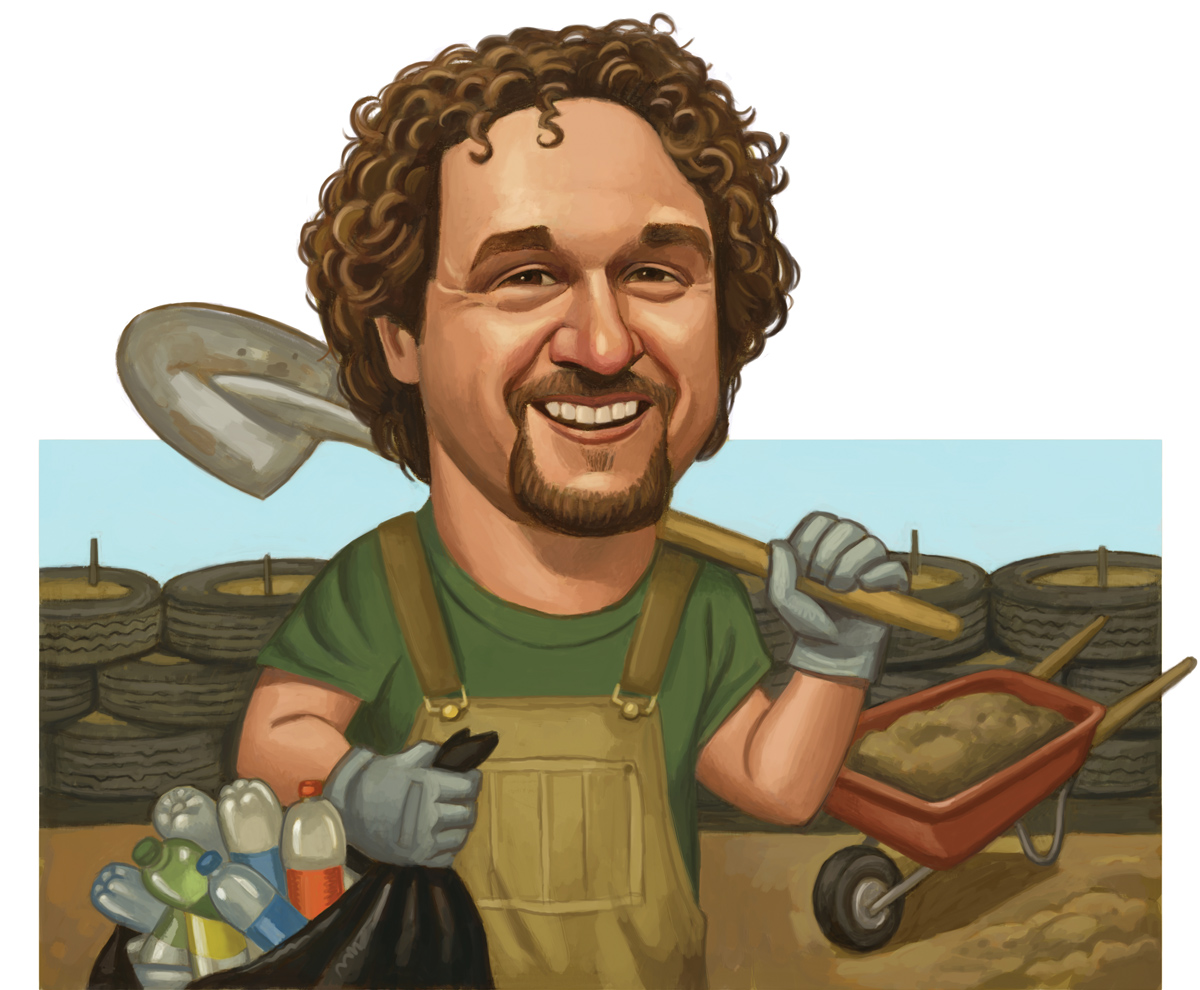 teven Wright ’06 loves trashing places. Or rather, creating places from trash. As co-director of 4 Walls International, he helps transform areas on both sides of the San Diego-Tijuana border by building public structures and spaces out of local trash, such as bottles and tires. The group launched in 2009, three years after Wright, 36, graduated from UC Riverside with a bachelor’s degree in ecology and evolutionary biology. He met 4 Walls’ co-director, Waylon Matson, on the rugby pitch when Matson played for UCR’s men’s club while attending California State University, San Bernardino. They had a lot in common — from being born on the same day to wanting to make a difference for the environment.

“I was just someone willing to rock the boat to make things better,” said Wright, who went to high school in Temecula.

In fact, he bankrolled the nonprofit’s prototype project with savings he had earmarked for a boat. The garbage building method is simple, according to Wright, who explained soda bottles are stuffed full of quarter-pound polyurethane wrappers, foam, and plastics. The bottles are then laid out in a honeycomb matrix in cement, mud, or both. Among 4 Walls’ standout projects is an artisan workspace called Casa De Botellas in Los Laureles, Mexico, in which Wright and his crew retrofitted 2,000 plastic bottles and 750 glass bottles into the building. For a park renovation known as Los Sauces in Tijuana, Mexico, the group partnered with the U.S.-Mexico Environmental Program: Border 2020, a binational effort designed to protect the environment and public health in both countries. 4 Walls repurposed more than 2,000 plastic bottles from arroyo neighborhoods for the park’s mosaic benches. A project to transform a community lot in southeast Imperial Beach sponsored by The San Diego Foundation’s Opening the Outdoors Initiative, The Parker Foundation, and Kaiser Permanente, resulted in six steel sculptures and more than 300 native plants being planted. Next, the organization hopes to build a migrant shelter in Tijuana. Wright said many of its projects, which have also included building homes in Colombia, usually take four to six weeks to complete. He noted his time at UCR has been crucial to his work.

“Learning about evolutionary biology and ecology shapes everything I do,” said Wright, who resides in Imperial Beach and is currently building a home for himself in Mexico out of garbage. He hopes to finish it in the spring.

“Learning about organisms, having a better sense of all living things, it just allows you to understand how crucial the environment is, and how all of us play our roles,” he added.

In addition to its usual projects, which have been funded by donations and grants, 4 Walls is raising money for the Border Impact Bond, a public-private bond that would invest private capital in waste collection projects in Mexico while also cleaning San Diego waterways and beaches.

“Neither (the U.S. or Mexico) wants to see trash in the ocean,” Wright said. “The problem is increasing, and so is the cost. We have been able to show by creating incentives and jobs in Tijuana, we can spend much less than we spend dredging things out of the river."

THE PROBLEM IS INCREASING AND SO IS THE COST.